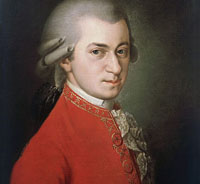 Wolfgang Amadeus Mozart was born in Salzburg, Austria to a musical family. He was the sole-surviving son of Leopold, an ambitious composer and violinist, and Maria Pertl Mozart. Leopold was the author of a famous violin-playing manual, Versuch einer gründlichen Violinschule, which was published in the very year of Mozart’s birth. Mozart’s only sister was Maria Anna, nicknamed “Nannerl”. Leopold raised his children as strict Catholics. This included attendance at mass, frequent confession and the veneration of saints. Mozart remained a committed Catholic throughout his life. With their father’s encouragement and guidance, children both were introduced to music at an early age. Leopold started Nannerl on keyboard when she was seven, as three-year old Wolfgang looked on.

From an early age, the young Mozart showed all the signs of a prodigious musical talent. At three he was picking out chords on the harpsichord, at four playing short pieces, at five he could read and write music, and he would entertain people with his talents on the keyboard. By the age of six, he was writing his first compositions, and by the age of eight had composed his first symphony.

Journey of young Mozart through Europe 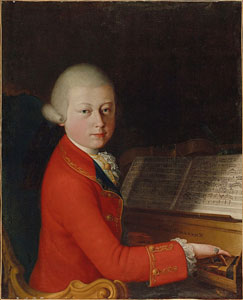 In 1762, Mozart’s father took him and Nannerl, also highly talented, to Munich to play at the Bavarian court, and a few months later they went to Vienna and were heard at the imperial court and in noble houses. Mozart embarks on a long journey through Western Europe – from Germany, Belgium and France, all the way to London. During his trip Mozart met a number of accomplished musicians and became familiar with their works. Particularity important was his meeting with Johann Christian Bach (Johann Sebastian Bach’s youngest son) in London who had a strong influence on Mozart.

Mozart would continue to develop his musical skills in Italy. In Italy, Mozart was well received: in Milan, Italy, he obtained a commission for an opera; in Rome he was made a member of an honorary knightly order by the Pope; and at Bologna, Italy, the Accademia Filarmonica awarded him membership despite a rule normally requiring candidates to be twenty years old. During these years of travel in Italy and returns to Salzburg between journeys, he produced his first large-scale settings of opera seria (that is, court opera on serious subjects): Mitridate (1770), Ascanio in Alba (1771), and Lucio Silla (1772), as well as his first string quartets. At Salzburg in late 1771 he renewed his writing of Symphonies (Nos. 14–21). 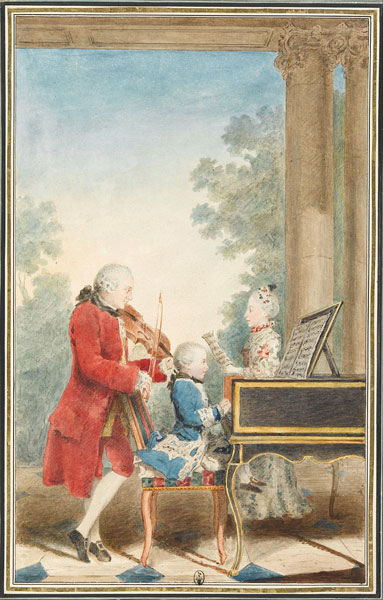 The Mozart family on tour: Leopold, Wolfgang, and Nannerl. Watercolour by Carmontelle, c. 1763

Aged 17, Mozart accepted a post as a court musician in Salzburg; although this did not suit him very well. He chaffed at the lack of independence from his patron Prince-Archbishop Hieronymus Colloredo (the ruler of Salzburg). Mozart was also indignant at his meagre salary (150 florins a year) which left Mozart feeling unappreciated. Yet, despite dissatisfaction and getting involved in rows, the next few years were a time of prolific composition. In 1777, he grew tired of the demands placed on him by his patron and negotiated the release from his contract. He left Salzburg and after travelling to Paris and Germany, he moved permanently to Vienna, Austria where he lived for the remainder of his life.

In 1777 Mozart left on a tour with his mother, Leopold not being well enough to go. They visited Munich, Augsburg, Mannheim and arrived in Paris in 1778. Mozart stayed there for more than four months, although he soon learned that again no position was to be had. He became friendly with the Mannheim musicians, undertook some teaching and playing, accepted and partly fulfilled a commission for flute music from a German surgeon, and fell in love with Aloysia Weber, a soprano, the second of four daughters of a music copyist. He also composed several piano sonatas, some with violin.

After nine difficult months in Paris, from March 1778 to January 1779, Mozart returned once more to Salzburg, having been unable to secure a foothold and depressed by the entire experience, which had included the death of his mother in the midst of his stay in Paris.

While Mozart was in Paris, his father was pursuing opportunities of employment for him in Salzburg. With the support of the local nobility, Mozart was offered a post as court organist and concertmaster. But Mozart was reluctant to accept. After leaving Paris in September 1778 for Strasbourg, he lingered in Mannheim and Munich, still hoping to obtain an appointment outside Salzburg. Mozart finally returned to Salzburg on 15 January 1779 and took up his new appointment, but his discontent with Salzburg remained undiminished.

Move to Vienna and starting a family

Mozart’s years in Vienna, from age twenty-five to his death at thirty-five, cover one of the greatest developments in a short span in the history of music. In Vienna, he tries to make his way as a freelance performer, opera composer and teacher. In these ten years Mozart’s music grew rapidly beyond the realm of many of his contemporaries; it exhibited both ideas and methods of elaboration that few could follow, and to many the late Mozart seemed a difficult composer. 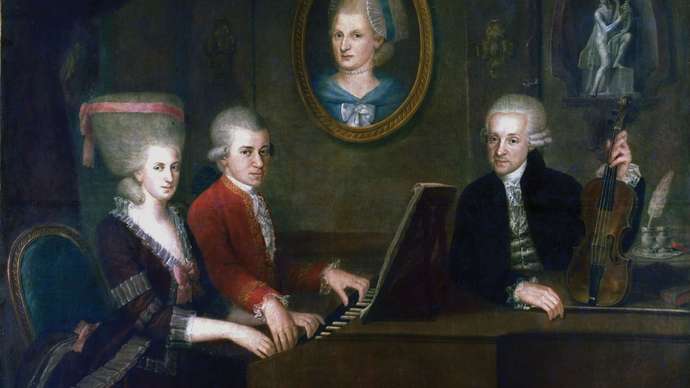 On 4 August 1782, against the will of his father, he marries Constanze Weber. Together, the couple travel to Salzburg and Prague. Of their six children, only Karl Thomas and Franz Xaver Wolfgang survive beyond childhood.

One of his last operatic successes is La Clemenza di Tito (K 621), the Coronation Opera first performed in Prague on 6 September 1791. Shortly after the premier of The Magic Flute (K 620) at the Freihaustheater in Vienna, Mozart fell ill. In the last year of his life, he began composing one of his greatest works – The Requiem. Mozart died before he could finish. He died in Vienna on 5 December 1791 at the age of 35. Reasons for his death are not clear. The most likely is a sudden illness – possibly the plague or possibly a combination of rheumatoid arthritis and pneumonia. One legend is that he was poisoned by a jealous rival composer Salieri, but this theory is discredited.