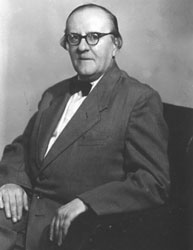 Nadenenko Fedir Mykolayovych was born in the town of Lgov, Kursk province, into a large merchant’s family. His parents, Nikolai Ivanovich Nadenenko and Alexandra Vasilievna Shevchenko, had many children, but only six sons and two daughters survived.

Fedir started playing the piano at a very early age. He played every day for several hours. Nadenenko liked playing works of serious composers such as Robert Schumann, Ludwig van Beethoven, but he loved Pyotr Tchaikovsky more. While his peers read books about adventures, he was fond of reading scientific books, especially on astronomy.

In 1913, Nadenenko’s father sold everything in Lgov and moved to Kyiv. At the age of 12, Fedir was admitted to the Lysenko Music and Drama School in the piano class, but immediately to the graduating class, after which he entered the Kyiv Conservatory without any problems. At the age of 16, he simultaneously began to study at the History and Philology Faculty of Kyiv University.

After graduation, Nadenenko began his creative activity as a composer. He first trained at the Kyiv Opera and Ballet Theater as the chief accompanist and assistant conductor to I.O. Palitskin and A.P. Steinberg, and then Nadenenko became the chief choirmaster of the theater. At the same time he worked as a senior editor of the State Music Publishing Houses of Ukraine.

In 1924, the first romances of the young composer were published – The Star Twinkles Outside the Window (Zvezda mertsayet za oknom), These Days (V eti dni), Great Happiness (Bol’shoye schast’ye), There Is No Return to Love (Lyubvi vozvrata net), Children’s Songs (Detskiye pesni).

Nadenenko wrote a lot, worked fruitfully in the Theater of Opera and Ballet, in the Philharmonic, on the radio, he edited the works of classics and contemporary composers. In 1926-1935, and 1942-1943, Nadenenko worked as an accompanist and choirmaster at the opera houses in Kyiv.

In 1935, after his wife’s death, he left for Leningrad, where he worked from 1936 to 1937. Nadenenko gave concerts and began to write opera. But not everything was good in his life. Feasts and banquets were arranged after concerts, performances, late rehearsals, Nadenenko was very lonely, it seemed that alcohol made him feel better, took away from sorrowful memories, helped to create. Many people began to avoid communicating with him, the opera was abandoned, the contracts concluded were not fulfilled. After the war Nadenenko returned to Kyiv.

By the end of his life Nadenenko was the author of about 80 piano pieces, choirs, over 100 Ukrainian romances, as well as romances based on poems by Alexander Sergeyevich Pushkin, Mikhail Yuryevich Lermontov, Taras Hryhorovych Shevchenko, Adam Bernard Mickiewicz, and Rabindranath Tagore, etc.

Nadenenko devoted more than 40 years to publishing, editing the entire legacy of Ukrainian classics, including 8 volumes of works by composer Mykola Vitaliyovych Lysenko.

Fedir Mykolayovych Nadenenko died on December 2, 1963 at the age of 61. He was buried at the Baikovo cemetery in Kyiv.