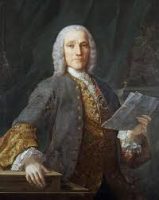 Virtually nothing is known of the early life, training or career of composer Domenico Scarlatti, who was born and baptized Giuseppe Domenico in Naples, Kingdom of Naples, belonging to the Spanish Crown, in 1685. He was the sixth of ten children of the composer, professional musician and teacher Alessandro Scarlatti and Antonia Anzalone. Domenico was probably trained by his father. His elder brother Pietro Filippo was also a musician.

Nothing is known of his musical training; while he profited from the study of compositions by Gasparini, Greco, Pasquini, and the elder Scarlatti, it is not certain that any of them were his actual teachers, but he was surely surrounded by music of the highest quality. There is no record of his attendance at a conservatory.

Domenico’s father, Alessandro Scarlatti, was the dominant figure in his life. When Domenico was 15, his father arranged his first appointment, as organist and composer for Royal Chapel in Naples, of which his father was maestro, but no compositions from that very period are extant. Alessandro Scarlatti wanted his son to continue with vocal music despite the enormous talent he had shown for keyboard music.

In 1703, he revised Carlo Francesco Pollarolo’s opera Irene for performance at Naples. In 1705, Alessandro sent his son to Venice, presumably to study composition. It is likely that he met the famous composers Gasparini, Vivaldi, and Handel while he was there, but nothing is known for certain.

Domenico made his way to Rome next, where he took over his father’s position of musical director to Queen Maria Casimira of Poland. He composed incidental music and seven operas for her, but once again, they are not important works.

According to legend, Domenico Scarlatti met Handel during his time in Rome and had a duel of skill on the organ and harpsichord, with the great German composer proving himself the superior organist, and a comparable if not inferior harpsichordist.

From 1714-1719, Domenico was at the Vatican, serving as music director for the Julian Chapel at St. Peter’s. Only one choral work composed for the Vatican has survived, the ten-voice Stabat Mater. Domenico composed two final operas during these years. It is as if he finally realized that he didn’t need to follow in his prodigious father’s footsteps quite so closely.

In Rome Scarlatti developed a friendship with the Portuguese ambassador, the Marquis de Fontes, which eventually led to his being appointed master of the royal chapel by João V of Portugal in 1719. Very little is known about his time in Lisbon, largely because many public records were destroyed in the earthquake of 1755, but Scarlatti made several trips to his home country, travelling to Rome to meet Quantz, and to Naples to pay final respects to his dying father.

In 1729, he moved to Seville, staying for four years. In 1733, he went to Madrid as a music master to Princess Maria Barbara, who had married into the Spanish royal house. She later became Queen of Spain. Scarlatti remained in Spain for the remaining 25 years of his life.

In 1728, he returned to Rome to marry 16-year-old Maria Caterina Gentili, the mother of his five children. His first wife died in 1739, and he married a Spaniard, Anastasia Maxarti Ximenes, in 1742. From these two marriages, Scarlatti had nine children, and none of the four surviving children were to become musicians.

Domenico Scarlatti died in Madrid, Spain on July 23, 1757. His residence and his music have been preserved as part of Spanish Cultural Heritage. Many of his descendants still live in Madrid to this day.