Aleksander Nikolayevich Scriabin (born January 6, 1872, [December 25, 1871, O.S.], Moscow, Russia – died April 27 [April 14, O.S.], 1915, Moscow), a famous Russian composer and pianist who invented the first colour keyboard and notation for lights and colours based on his scale of Synesthetic colours. Scriabin’s eccentric and mystic music was a result of his philosophical ideas, because of his unusual harmonies he was considered one of the main Russian symbolist composers.

Alexander Scriabin was born into a noble family on Christmas Day, on January 6, 1872 (old calendar date December 25, 1871, the Russian Orthodox Christmas). The Scriabins had firm roots in the military. His father and all of his uncles had military careers. Alexander’s father, Nikolai Aleksanderovich Scriabin, was then a student at the Moscow State University, later he made a brilliant career as a diplomat. His mother, Lyubov Petrovna Scriabina (née Schetinina), was a professional pianist and former pupil of Theodor Leschetizky. When Alexander was only one year old, she died of tuberculosis. After his mother’s death, Scriabin’s father completed tuition in the Turkish language in St. Petersburg’s Institute of Oriental Languages, became a diplomat and left for Turkey, leaving the boy with his grandmother and aunt. Young Alexander Scriabin was brought up by his aunt, his father’s unmarried sister Lyubov Aleksanderovna Scriabina, an amateur pianist who was his first music teacher. The boy’s musical talent was discerned at an early age. He started to play at the age of four. 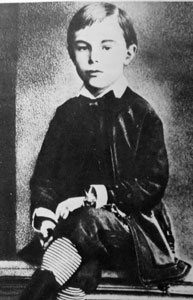 When Alexander was eight he fell in love and wrote parts of an opera called Lisa named after the little girl he regarded as his sweetheart. Scriabin started taking piano lessons from Nikolai Zverev, a strict disciplinarian, who was teaching Sergei Rachmaninoff and a number of other prodigies at the same time. Scriabin dreamed of a career in the military. When he was ten, he put on a uniform, but he was ridiculed and bullied because of his weak stature and short height. By this time he had already begun to show the signs of mental instability, which were to remain with him throughout his life.

Alexander Scriabin was trained as a soldier at the Second Moscow Cadet Corps from 1882 to 1889. At the Moscow Cadet School he studied sciences and languages, but Scriabin also studied music at the same time and took piano lessons. 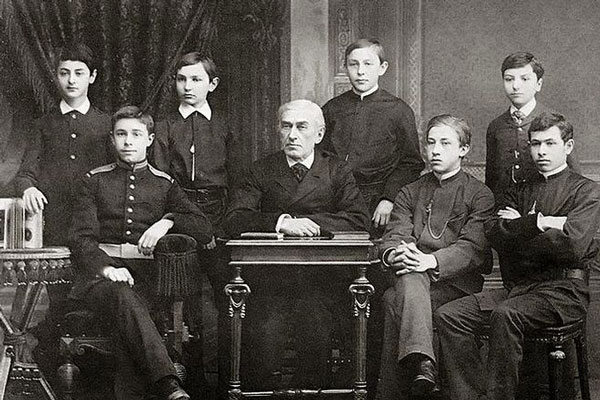 Nikolai Zverev with his students in the late 1880s. Alexander Scriabin (in cadet uniform)

From 1888 to 1892, he studied at the Moscow Conservatory where his teachers were Vasily Safonov (taught him to play the piano), Anton Arensky and Sergei Taneyev (mentored him in composition). While practicing Franz Liszt’s Réminiscences de Don Juan, he seriously damaged his right hand and the doctors dismissed the hope of it ever recovering. This was a veritable catastrophe, threatening his entire career. But Scriabin wrote his first large-scale masterpiece, his Piano Sonata No. 1 in F minor, as a “cry against God, against fate.” It was his third sonata to be written, but the first to which he gave an opus number (his second was condensed and released as the Allegro Appassionato, Op. 4). He eventually regained the use of his hand. By 1892 he had composed the piano pieces that constitute his opuses 1, 2, 3, 5, and 7. Graduating with the Gold Medal in 1892, as composer and pianist, later Scriabin became a professor at the same conservatory. In the decade of 1882 to 1892 mostly inspired by Liszt and Chopin, Scriabin composed many musical pieces, most of them were for the piano – waltzes, mazurkas, preludes, etudes, nocturnes and sonatas. Typical examples of Romantic music for the piano, these works nevertheless reveal the composer’s strong individuality. 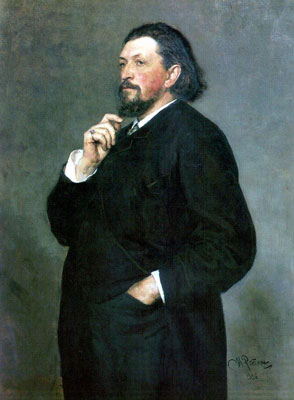 Scriabin launched his concert career in 1894, he made his debut as a pianist in St. Petersburg, performing his own works to positive reviews. Scriabin’s concert attended Mitrofan Petrovich Belyayev, who later became his mentor, patron and publisher. In the same year, Scriabin composed for Belyayev’s publishing company (he published works by notable composers such as Nikolai Rimsky-Korsakov and Alexander Glazunov).

In 1897 Scriabin married a famous pianist Vera Ivanovna Isakovich, she was an excellent pianist, but her personality was completely opposite as compared to Scriabin. It was not a good match. They had three girls and a boy (Rimma, Elena, Maria and Lev), two died at an early age. The eldest daughter died due to psychosomatic disorder and the son died because of fever.

In 1898 he composed an orchestral work Rêverie, Op. 24. From 1898 until 1903 he taught at the Moscow Conservatory, supporting himself and his wife while attempting to establish his reputation as a composer. In this period he composed his cycle of études, Op. 8, several sets of preludes, his first three piano sonatas, and his only piano concerto, among other works, mostly for piano. By the end of 1904, Scriabin and his wife had moved to Switzerland. He was completely devoted to composition while he was there. Scriabin began working on the composition of the Third Symphony, entitled Le Divin Poème (The Divine Poem). It was first performed under a famous Hungarian conductor Arthur Nikisch in Paris in 1905, where Scriabin wasn’t accompanied by his wife Vera Ivanovna Scriabina, but by Tatiana Fyodorovna Schlözer – a former pupil and the niece of Paul de Schlözer.

He abandoned his wife and four children and went to live with his mistress, Tatiana Schlözer, who gave birth to two daughters (Ariadna and Marina) and a son Julian who was a young pianist himself. He drowned in the Dnipro River in Kyiv at the age of 11.

Tatiana Schlözer with her children Ariadna, Marina and Julian

Scriabin was fond of the writings of symbolist poets. Vladimir Solovyov’s philosophy had a particular influence on him. Scriabin was also a friend of the philosopher Sergei Trubetskoy, who became an influence in the development of the composer’s philosophical outlook. Scriabin attended philosophical clubs and participated in literary disputes, which led to the emergence of his own philosophical and artistic concept of the ‘creative spirit’ reflected in the Third Symphony (The Divine Poem, 1903-1904), The Poem of Ecstasy (1905-1907), Prometheus (1911), and in piano works. Scriabin, previously influenced by Friedrich Nietzsche’s ‘Zarathustra’ and übermensch (superhuman being) theory, also became interested in theosophy, and both would influence his music and musical thought. In his later years, he would see himself as a ‘Superman’, who would lead like a prophet, evoking Baudelaire’s concept of the role of the poet, and would liberate humanity through the ‘mystery of music, colour, dance, and scents’ – through the experience of true ‘synesthesia’. Artistic creation for him became a state of ‘mystical ecstasy’ similar to a divine revelation. The Poem of Ecstasy and Prometheus reflected the theosophical ideas. Having become acquainted with the teachings of Helena Blavatsky, Scriabin became interested in Oriental religious teachings and came up with the idea of ​​synthesizing music and other forms of art, reviving the genre of ancient mystery.

Concerts in Western Europe and in the United States

From 1904-1910 with the financial support of a wealthy sponsor, Scriabin was living and concertizing in Western Europe and in the United States. In Western Europe he started developing an original, highly personal musical idiom, experimenting with new harmonic structures and searching for new sonorities. From 1906 to 1907, Scriabin toured United States and gave concerts with Safonov and the conductor Modest Altschuler. While in New York City, Scriabin met Alfred La Liberté, who was his good friend and disciple. Scriabin was a remarkable pianist and successfully performed his original compositions before international audiences.

While living in Brussels in 1908, he become interested in Jean Delville’s Theosophist movement and continued his reading of Helena Blavatsky. He entered the circle of late Helena Blavatsky in London and studied her Theosophy. The theological teachings of Helena Blavatsky became the backbones of Scriabin’s compositions of philosophical ideas. In 1909 he was encouraged by the conductor Serge Koussevitzky, who both performed and published his works, to return to Russia.

In 1910, Scriabin codified his sound and colour senses and composed a work that would use both aspects in performance: Prometheus: Poem of Fire. He started writing it in 1909 and completed it in 1910. He invented his clavier à lumières (keyboard with lights), where both colours (red, blue, etc.) and effects (lightning, sparkles) for use in his work Prometheus: Poem of Fire. Only one version of this instrument was constructed, for the première in New York in 1915, created by Scriabin’s friend, an electrical engineer. Inspired by his Prometheus, Scriabin continued to explore the ideas of a ‘mystery’, linking music, poetry, and dance, leading to the redemption of humanity through a symphony of sound, light, color, and scents which would envelop the listener and bring him to a state of ecstasy.

Scriabin continued to compose on big projects and wanted to perform a multi-media project on the Himalayas. He was looking forward to uniting all of mankind through these compositions and went on to create a seven-day long composition, he left only sketches for this piece, Mysterium, although a preliminary part, named Prefatory Action (L’acte préalable) was eventually made into a performable version by Alexander Nemtin. Part of that unfinished composition was performed with the title Prefatory Action by Vladimir Ashkenazy in Berlin with Aleksei Lyubimov at the piano.

Imaginative, esoteric, and idiosyncratic, Aleksander Scriabin’s contribution to the world of music is peerless.