Billy Strayhorn [birth name William Thomas Strayhorn] (born November 29, 1915, Dayton, Ohio, United States – died May 31, 1967, New York City, United States) was one of the greatest composers in the history of American music, arranger, pianist and lyricist, the creator of a body of work that includes such standards as Take the ‘A’ Train, A Flower Is a Lovesome Thing, Chelsea Bridge, and Lush Life. Strayhorn influenced the American jazz movement with his pioneering efforts. Strayhorn’s career was inextricably linked to that of the great Duke Ellington, with whom he worked for three decades as the Ellington Orchestra’s ace songwriter and arranger.

Billy Strayhorn was born in Dayton, Ohio, in 1915. Strayhorn joined his four older living siblings (four others died). His parents were Lillian Young Strayhorn and James Nathaniel Strayhorn. The family struggled financially. After living in several cities in Strayhorn’s early life, they settled in Pittsburgh, Pennsylvania in 1924. Inspired by his grandmother, he displayed musical talent from a young age.

Strayhorn attended Westinghouse High School there as well as the Pittsburgh Musical Institute for piano lessons and classical music study. In high school, Strayhorn took centerstage in an all-white orchestra and went on to write music and lyrics for a musical revue for Cole Porter.

As a young man, Strayhorn worked various jobs so that he could purchase his own piano, and took lessons from Charlotte Enty Catlin. He played piano in small groups in the Pittsburgh area. While still in his teens, composing (with lyrics) the songs Life Is Lonely (later renamed Lush Life), My Little Brown Book, and Something to Live For. By age 19, he was writing for a professional musical, Fantastic Rhythm. 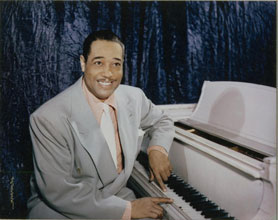 In 1938, Strayhorn met Duke Ellington who immediately hired him. He became a protégé of Duke Ellington. Strayhorn remained with Ellington for the next 25 years in the roles of composer, arranger, and pianist. The following year they recorded their first collaboration, Something to Live For, with Strayhorn on piano. In 1941, following Duke’s written subway directions to his house, Strayhorn composed and wrote the lyrics to Take the ‘A’ Train which became the band’s theme song. He worked as arranger, composer and second pianist for Ellington until his death, which left Ellington devastated. 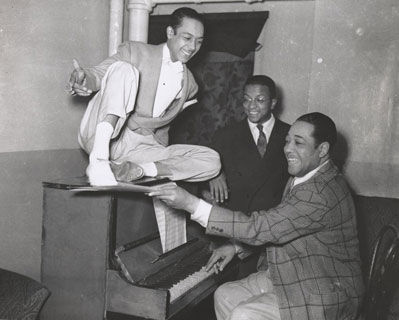 Throughout his life, Strayhorn was surprisingly open about being gay. In 1939, he met jazz pianist Aaron Bridgers. They were lovers until Bridgers moved to Paris in 1948, for his first professional engagement. It’s been widely reported that it was Duke Ellington’s son, Mercer, who introduced them, as he felt Billy needed someone. Bridgers became a French citizen in 1974, and remained in France the rest of his life. Strayhorn visited him often when in Paris. In 1961, he appeared in the movie Paris Blues. Strayhorn lived an openly gay lifestyle when being gay was absolutely viewed as unacceptable by the vast majority of society.

Strayhorn participated in many civil rights causes. As a committed friend to Martin Luther King Jr., he arranged and conducted King Fit the Battle of Alabama for the Ellington Orchestra in 1963 for the historical revue (and album) My People, dedicated to King.

In 1964, Strayhorn was diagnosed with cancer of the esophagus, aggravated by years of smoking and drinking, and he submitted his last composition, Blood Count, to the Ellington band while in the hospital. Shortly after Strayhorn’s death in May 1967, Ellington recorded one of his finest albums and the best introduction to Strayhorn’s work, And His Mother Called Him Bill (RCA), in memory of his friend.