Otar Taktakishvili’s life began in Tiflis (now Tbilisi), Georgia. He was born into a family of the Abkhaz nobleman Vasily Chachibai and the Georgian Princess Elizabeth Mikhailovna Taktakishvili. His father died when Otar was small, therefore he bore his mother’s surname. Otar grew up being surrounded by music. Thanks to his mother, who worked as an artist at the Georgian Opera House, as well as to his uncles, Shalva Taktakishvili (composer and professor at the Tbilisi Conservatory) and Giorgi Taktakishvili (cellist and music school director), Otar began his early piano and composition studies. All these people influenced his development. The future composer received his love for Georgian folk music from his mother.

After studying piano with different teachers as a young man, in 1942 Taktakishvili entered the Tbilisi Conservatory, where he majored in composition under Sargis Barkhudaryan and Andria Balanchivadze, and studied conducting with Alexander Gauk. While he was at the Conservatory, 22-year old Taktakishvili took part in a prestigious composition competition sponsored by the authorities for a new national anthem for the Soviet Socialist Republic of Georgia and won it. Soon Otar Taktakishvili found himself famous. In 1947 he graduated from the Tbilisi Conservatory.

In 1947, Taktakishvili began teaching choral literature, counterpoint, orchestration, and composition. In 1950, he completed his doctoral degree at the Conservatory. In 1951 he received his first Stalin Prize (USSR State Prize) for his First Symphony. He was also awarded the Lenin Prize in 1982, and the title of USSR People’s Artist in 1974. In 1952-1956 he was the conductor and the artistic director of the country’s top chorus, Georgian State Capella. In 1961-1962, Taktakishvili became Chairman of the Soviet Georgian Composers’ Union. In 1962-1965, he worked as the Rector of the Tbilisi Conservatory. Taktakishvili achieved incredible political recognition in his lifetime. Political appointments included: deputy Supreme Soviet of the USSR, deputy to the Supreme Soviet of the Georgian SSR, Presidium member of the International Musical Committee of UNESCO, Minister for Culture of the Georgian Republic (1965-1984), chairman of the Georgian Composers’ Union (1962), secretary and board member of the USSR Composers’ Union (1957-1989), and jury chairman of various international competitions. 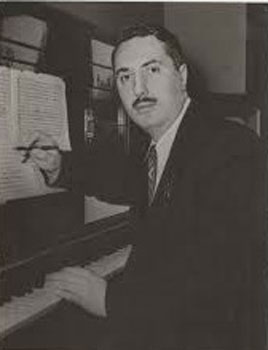 Otar Taktakishvili at the piano

Taktakishvili’s music legacy includes several notable operas – Mindia, staged in 1961, based on Vazha Pshavela’s epic poem The Snake Eater (Zmeyeyed), Three Novellas, staged in 1967, is an operatic triptych of one-act operas Two Verdicts, The Soldier, both based on short stories by Mikheil Javakhishvili, Raise the Banners Higher!, based on poems by Galaktion Tabidze; the 2nd version of the opera was re-titled Three Lives (1972), and the third novella, Chikori, was rewritten.