Eubie Blake, byname of James Hubert Blake, (born February 7, 1887, Baltimore, Maryland, U.S. – died February 12, 1983, Brooklyn, New York), was an African-American ragtime pianist and composer of over 300 songs. He was one of the most important figures in early-20th-century African-American music. Blake was active until the very end of his hundred years of life. Blake composed hundreds of songs and received many accolades for his work. Equally renowned as a pianist and as a composer, Blake also influenced the careers of many musicians who came after him.

Eubie Blake was born James Hubert Blake on February 7, 1883, in Baltimore, Maryland, into a family of former slaves. Eubie’s father, John Sumner Blake, was a Civil War veteran and a stevedore and his mother, Emily Johnston Blake, was a laundress. The Blake home was a very strict one. His father insisted on the virtues of education, having become literate despite being enslaved, and his mother was strongly religious. Blake was involved with music from a very young age. It was his mother, who introduced her little son to music, buying him a small pump organ in the hope that he would develop into a church musician. When Blake was 16, he began playing piano professionally; he wrote his first composition, Sounds of Africa, (later retitled Charleston Rag) around the same time.

Blake entered into a partnership with singer-songwriter Noble Sissle in 1915; the two would work together on the 1921 musical Shuffle Along, featuring the mega-hit I’m Just Wild About Harry. Together, Blake and Sissle wrote many hits. Their career was given a great boost when one of their songs, It’s All Your Fault, was featured in the performances of the popular vaudeville and nightclub singer Sophie Tucker.

In 1916 Sissle introduced Blake to New York bandleader James Reese Europe, known not only for having established the Clef Club, an organization that provided hundreds of black musicians with well-paying jobs playing for New York’s white high-society clientele, but also for supplying music for such entertainers as the ballroom- and popular-dance duo Vernon and Irene Castle. The collaboration of Blake, Sissle, and Europe was interrupted by World War I and Sissle and Europe’s military service overseas. Europe and Sissle returned to the United States in 1919. James Reese Europe died shortly after returning from Europe. Upon Sissle’s return in 1919, they developed a vaudeville act which travelled under the name The Dixie Duo. 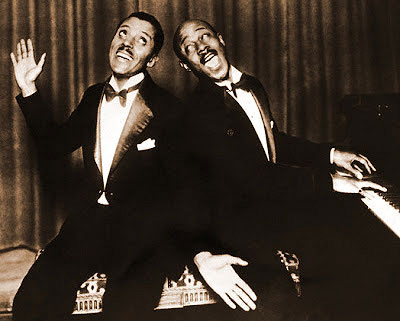 The duo collaborated with writer-performers Flournoy Miller and Aubrey Lyles to produce Shuffle Along, the first all-black Broadway show to play for full Broadway prices. The musical opened on May 23, 1921, and became a groundbreaking long-running production, closing after some 500 performances. Songs from the musical included Bandana Days, In Honeysuckle Time, If you’ve Never Been Vamped by a Brownskin, You’ve Never Been Vamped At All. Shuffle Along yielded Sissle and Blake’s best-known song, I’m Just Wild About Harry, as well as the romantic ballad Love Will Find a Way, the performance of which was revolutionary in that it allowed African Americans to express feelings of love on the American stage in a context other than that of caricature. Several revivals of Shuffle Along were mounted years after the show had closed. Most notable were the productions of 1933 and 1952. Despite the fact that Sissle and Blake tried to rejuvenate their once hit show with new songs, neither revival was nearly as successful as the first. 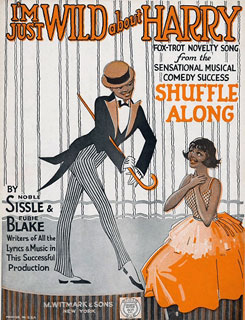 Cover of sheet music of I’m Just Wild About Harry, from the musical Shuffle Along, by Blake and Noble Sissle, 1921

In 1945, Blake enrolled in a music program at New York University and graduated at the age of 67. During the 1950s, ragtime once again began to be appreciated by the public and hence over the years Blake would be recognized as one of the great living purveyors of the form. In the late 1950s, however, in the midst of a ragtime revival, Blake began to be recognized as a ragtime pioneer. He was featured on several albums of ragtime music, and in 1960 he appeared on the NBC special Those Ragtime Years. Blake’s popularity grew throughout the decade. In 1969, he recorded with Columbia Records The 86 Years of Eubie Blake. He became a regular guest on The Tonight Show during the ’70s, received many awards and performed until he was in his late 90s, having ultimately composed more than 350 songs. In 1981 Blake was awarded the Presidential Medal of Freedom. In honour of Blake’s 100th birthday, the Kennedy Center presented the televised Eubie Blake: A Century of Music, which won an Emmy Award in 1983. 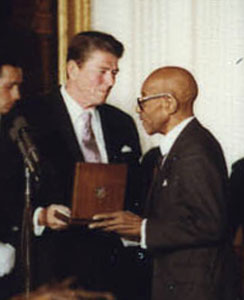 Blake receiving the Presidential Medal of Freedom from Ronald Reagan, 1981.