William Christopher Handy (born November 16, 1873, Florence, Alabama, U.S. – died March 28, 1958, New York City) an African-American blues composer, musician, songwriter, band leader, cornetist, publisher and folklorist known as the ‘Father of the Blues’, mostly due to the impressive and innovative techniques he inculcated into Blues music. Handy popularized blues music in the early 20th century, with hits like Memphis Blues (1912) and St. Louis Blues (1914). The son of former slaves, he understood plantation life and the struggles of post-emancipation African Americans. The music and struggles absorbed in Handy’s childhood inspired his own compositions.

William Christopher Handy was born in Florence, Alabama into the family of Charles Bernard Handy and Elizabeth Brewer. His grandparents and parents were among the four million slaves freed by President Abraham Lincoln’s Emancipation Proclamation of 1863. Handy’s grandfather and father were ministers in the African Methodist Episcopal Church. The church had a deep influence on the boy’s early musical development. His early years were spent living in a log cabin built by his grandfather William Wise Handy. The log cabin of Handy’s birth has been preserved near downtown Florence. 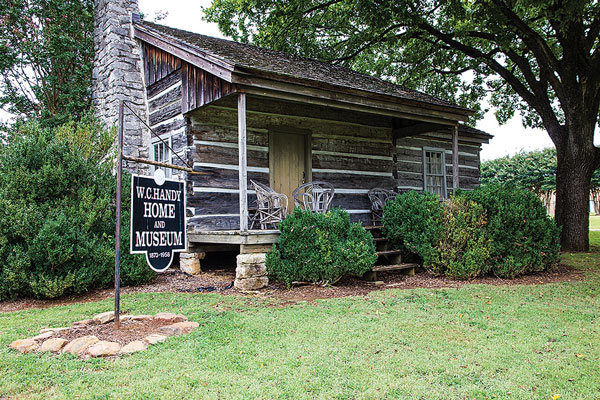 A small log cabin in Florence, the birthplace of W.C. Handy

Going against family tradition, he began to cultivate his interest in music at a young age and learned to play several instruments, including the organ, piano and guitar. The boy learned the sounds of local songbirds and riverboat whistles, and had soon mastered the cornet. Handy joined a local blues band as a teenager, but he kept this fact a secret from his parents. He purchased a cornet from a fellow band member and spent every free minute practicing it. He was exceptionally bright, and after graduating near the top of his class, he passed a teaching examination with ease in 1892, and gained a teaching job at the Teachers Agriculture and Mechanical College in Huntsville in 1893, but due to low wages he quit soon after. Finding better pay at a factory, he changed jobs, and in his free time he trained three other musicians to read music and organized a string quartet, named the Lauzetta Quartet, and travelled with the band to perform at the World’s Fair in Chicago. Stopping in St. Louis on their return, conditions were bad and the quartet disbanded. 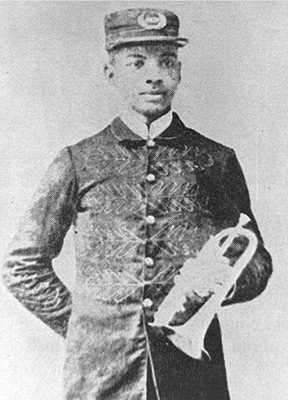 Handy then relocated to Evansville, Indiana where he joined a successful band that toured locally. His musical endeavors were varied: he sang first tenor in a minstrel show, worked as a band director, choral director, cornetist, and trumpeter. He met Elizabeth Price at a performance in Kentucky and they married in 1896. At the age of 23, he became the bandmaster of Mahara’s Minstrels, a Chicago-based musical company, as a cornet player. Handy and his new wife would spend the next three years on the road, ranging from Texas in the west as far as Cuba in the south, he advanced quickly to the position of bandleader and began to add his own compositions and arrangements to their repertoire. When the group passed near Handy’s home town in Alabama, he and Elizabeth decided to remain in Florence. While in Florence, Elizabeth gave birth to the first of six children (a daughter named Lucille) on June 29, 1900.  The same year he left the Minstrels to accept a position at Alabama Agricultural and Mechanical College in Huntsville, then the only black college in the state. After only two years of leading the school’s band and orchestra, however, dissatisfied with both his compensation and the school’s emphasis on European (over American) music led to his 1903 decision to rejoin the Minstrels for one additional year. 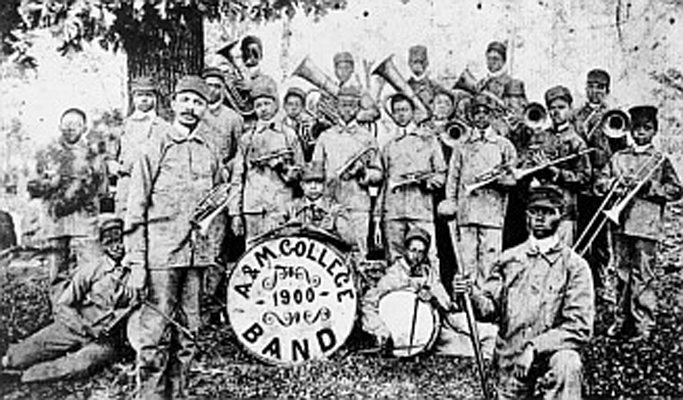 In 1903 settled in Clarksdale, Mississippi, a regional market town in the Delta, to lead the town brass band. Over the next two years, he travelled widely in the region, where blues music was emerging, and he wrote down bits of melodies and lyrics that he heard sung by itinerant balladeers. Handy was then made leader of a black band in Clarksdale, Mississippi, the Colored Knights of Pythias, which played for audiences of all races.

By 1909, Handy was a leading area bandleader, and in the mayoral election of that year he was hired to draw crowds for candidate Edward Crump. Handy’s first blues piece Mr. Crump (later retitled Memphis Blues) was a satirical comment on a politician in Memphis, Boss Crump, who adopted it as the theme song of a successful mayoral campaign. The tune became hugely popular around the city. This composition caught the attention of publisher Theron Bennett, who convinced Handy to sell the copyright for $100 in 1912, but his name and indelible style had been established. Memphis Blues made history when it became the first commercially published blues song. Around 1912, Handy became business partner with a university friend named Harry Pace, with whom he worked for the next 8 years. In 1914 Handy penned his masterpiece, St. Louis Blues, which would become one of the most-recorded tunes of all time. A quarter century later, Handy said it was still bringing him $25,000 in annual royalties. Located on Beale Street, the Pace and Handy Music Company published a series of blues hits including Yellow Dog Blues (1914), Joe Turner Blues (1915), Hesitation Blues (1915) and Beale Street Blues appeared in 1916, and in 1917 Handy’s 12-piece Orchestra of Memphis recorded for Columbia Records in New York City. Handy’s success increased with each new release and paralleled the rising popularity and mainstream acceptance of the blues. 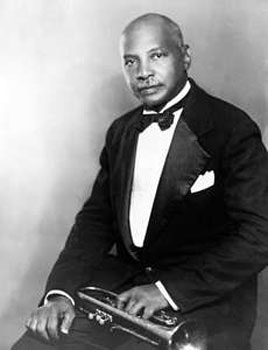 With his band, the Mahara Minstrels, Handy went on tour and relocated to New York in 1918. Race Records, recordings by black artists, were popular in the 1920s, and Handy and Pace published and recorded them at the Black Swan Recording Company in Harlem. Among his own compositions during that period were Careless Love (1921) and Aunt Hagar’s Blues (1922). Throughout the 1920s and 1930s Handy continued to produce hugely popular songs, while struggling with vision problems and the death of his first wife in 1937. In 1928 Handy became the first artist to perform the blues in New York City’s Carnegie Hall.  One year later his St. Louis Blues became the basis for a Hollywood movie by the same name. The title song was sung by Bessie Smith. 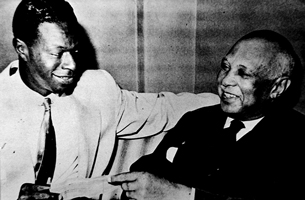 In 1926 he cowrote a book, the comprehensive survey Blues: An Anthology, which catalogued 53 classic songs and attempted to explain their derivation.  In 1928 he presented a concert representing the ‘full spectrum of black music’ at Carnegie Hall. In later years he turned to spirituals as a source of inspiration, publishing a Collection of Negro Spirituals in 1938 and Unsung Americans Sung in 1944. Handy’s own autobiography, Father of the Blues, appeared in 1941.

In December 1943, while in the subway in Harlem, Handy lost his way, fell on to the train tracks, and was knocked unconscious. Only the quick thinking of two men on the platform saved him from a grisly death; however, thereafter he was permanently blind. Handy remarried at the age of 80 in 1954, to Irma Louise Logan. 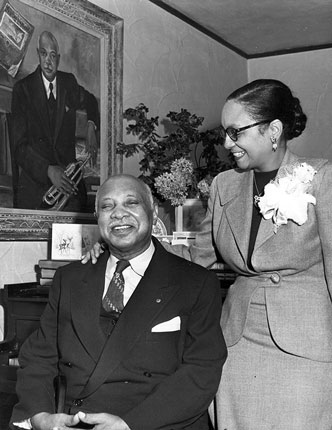 A stroke one year later confined him to a wheelchair, but did nothing to reduce his fame and popularity. Over 800 people attended his 84th birthday party, held at New York’s elite Waldorf-Astoria Hotel in 1958, and in that same year Nat King Cole starred in the biographical film, St. Louis Blues.

St. Louis Blues. An image of one of the movie’s original posters

W. C. Handy, ‘Father of the Blues’, died on March 28, 1958. Handy was honoured by the United States with a postage stamp in 1969; statues bearing his likeness stand in Florence and Memphis, and a block of 52nd Street in Manhattan was renamed in his honour. His compositions continue to be revived, particularly St. Louis Blues, one of the most frequently recorded compositions in history. 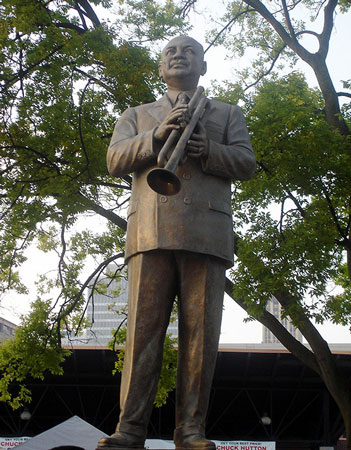