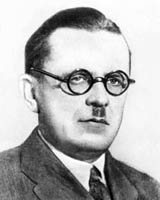 Kozytsky Pylyp Omelyanovych (born November 23 [November 11, O.S.], Letychivka, Ukraine, 1893 – died April 27, 1960, Kiev) was a Ukrainian composer, musicologist, educator, music critic, public figure and one of the organizers of Ukrainian musical life in 20’s of the XX century. He was among the founding members of the Leontovych Music Society. Kozytsky’s creative legacy includes instrumental and opera compositions, numerous choral works based on the words of Ukrainian and Russian poets, folk songs and works on the history of music, musical criticism and pedagogy. Kozytsky was one of the creators of the genre of Ukrainian Soviet mass song.

Pylyp Kozytsky was born in the village of Letychivka, Ukraine, in the family of the priest Omelyan Yukhymovych Kozytsky. Boy’s musical abilities appeared at a very early age. The future composer’s first teacher was his mother, Galyna Hryhorivna, an intellectual person who was familiar with classic literature and music. Kozytsky’s mother played the piano well. She introduced her son to the works of classics and taught him to play the piano.

In 1902 Kozytsky was sent to the Kyiv Primary School of Theology. There he met a young, but already known Ukrainian composer Kirill Stetsenko. This meeting greatly influenced Kozytsky’s musical development. In 1905 Kozytsky joined the Kyiv Theological Seminary. The seminarists’ training included music theory, choral singing and conducting. Kozytsky devoted his free time to music. At the seminary he began to compose a fairy tale opera to his own libretto About Snow-White and Rose (Pro Bilyanochku i Troyandu). He participated in the amateur orchestra of the seminary. The future composer was also a participant of string quartet, formed in 1912, which consisted of the orchestra musicians.

In 1911 – 1913, Kozytsky experimented with symphonic and chamber music. In those years, he created a piano suite The Childhood Page (Storinka dytynstva). After graduating from the seminary in 1913, Kozytsky entered a newly-organized Kyiv Conservatory. After a while, he began studying composition with a prominent theorist Professor Boleslav Leopoldovich Yavorsky and arrangement with Professor Reinhold Glière.

At the same time, he entered the Kiev Theological Academy and graduated from it in 1917. The academy had a good choir and Kozytsky became subsequently its director. In the library of the Theological Academy he studied materials about musical education in Ukraine. The result of this work was Kozytsky’s book Singing and Music at the Kiev Academy in its 300 Years’ Existence (Spiv i muzyka v Kyyivsʹkiy akademiyi za 300 rokiv yiyi isnuvannya).

After the October Revolution, Kozytsky was offered a position of a singing teacher at the First Kiev Labor School named after Taras Shevchenko, where he set up a choir which consisted of its students. Simultaneously with the work at the secondary school, Kozytsky started working at the first Ukrainian higher artistic educational institution. Since 1918 he had been a teacher of the history of Ukrainian music and a dean of the Conductor’s Department at the Lysenko Music and Drama Institute in Kyiv. In addition, he continued to study at the Conservatory, from which he graduated in 1920.

In the early 1920s Kozytsky was an active participant in the life of Ukrainian Autocephalous Orthodox Church. In 1921 he delivered a speech On Ukrainian Church Chants (Pro ukrayinsʹki tserkovni spivy) at the All-Ukrainian Orthodox Church sobor in Kyiv.

Kozytsky’s personal acquaintance with the outstanding composer Mykola Dmytrovych Leontovych had a great influence on his creative style and formation of aesthetic views. Leontovych’s creativity influence was reflected in one of Kozytsky’s best works of those years – the cycle of choral miniatures Eight Prelude Songs (Visim prelyudiv-pisenʹ). The tragic death of Mykola Leontovych in 1921 triggered a process of consolidation of Ukrainian music forces. In February 1921 the Leontovych Memorial Citizens’ Committee was formed, Kozytsky was one of its founding members. In 1922 the committee was reorganized into the Leontovych Music Society, where the composer became one of the best figures of this association and a deputy editor of its periodical Music (Muzyka). In 1925 he was appointed to the position of chairman of the Higher Music Committee of the People’s Commissar of Ukraine.

Works on current topics from the life of the Soviet Ukraine

At that time, a significant number of professional and amateur choirs appeared which demanded a new Soviet repertoire. The composers were given an urgent task to write choral and other works on current topics from the life of the Soviet Ukraine. With other composers Kozytsky started accomplishing this task. He focused his attention on the texts of the best Ukrainian Soviet poets – Chumak, Tychyna, Sosiura. Two of his choir preludes Digging, Digging (Ryiemo, ryiemo) and On the Green Carpets (Na zeleni kylymy) based on the words by Chumak, were then marked by the features of innovation. The desire for innovation also appeared in the creation of the original choir suite – a diptych. The first work in this form was a diptych Red way (Chervonym shlyakhom) (The Famine (Holod) – New Atlantis (Nova Atlantyda)). Kozytsky’s choral miniature The Famine with its distinct expressionistic means – sharply dissonant melodic lines, combined into a dark thick polyphonic choral texture – embodied the tragic images of famished Ukrainian villages of 1919. Creating a modern song repertoire, Kozytsky and Boguslavsky published a collection of Mass singing in 1926. 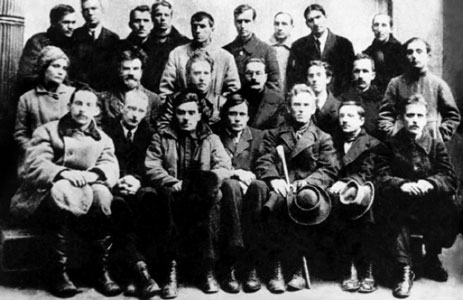 Ukrainian writers, painters, and composers, Kyiv, 1923. (Pylyp Kozytsky is the first in the first row)

In 1932 he began to compose the opera Unknown Soldiers (Nevidomi soldaty), based on the play by Pervomaisky, but in 1937 it was renamed into Jean Giradin. In 1935 Kozytsky was invited to work at the Odessa Film Studio. There he wrote music for films. Later, he wrote symphonic suite Five Novelettes (P’yatʹ novelett), based on those materials. Kozytsky wrote music for the films Mother (Maty), Taman (Taman’), Solar Masquerade (Sonyachnyi maskarad), Partisan’s Daughter (Partyzansʹka donʹka) and others.

From 1938 to 1941, Kozytsky worked as an artistic director at the Ukrainian State Philharmonic. In the days of World War II he lived in Ufa, Russia. There the composer began to learn national musical folklore and he wrote an article Collection of Bashkir Folk Songs (Zbirka bashkyrsʹkykh narodnykh pisenʹ). In 1941 Kozytsky composed a one-act opera For the Motherland (Za Batʹkivshchynu).

After the liberation of Kiev, Kozytsky returned to his hometown and headed the Department of Ukrainian Music History at the Conservatory. One of the most attractive works of those years was the cantata In Memory of the Bolshevik (Pam’yati bil’shovyka) for the choir without accompaniment. In the early 50’s Kozytsky again turned to the folk songs arrangement. The composer made a capella arrangements of several Slavic folk songs (Czech, Moravian, Slovak, Polish) for the choir.