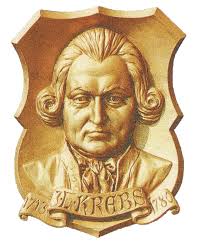 Johann Ludwig Krebs ((born October 10, 1713, Buttelstedt, Saxony (Germany) – died January 1, 1780, Altenburg), was a German Baroque musician, organist and composer famous for his organ music. He was most prominent student of Johann Sebastian Bach. Krebs wrote religious choral works, sonatas, trios and much organ music, some of which is heard today.

Johann Ludwig Krebs was born in 1713 in Buttelstedt, Saxony (Germany) into the family of an organist Johann Tobias Krebs. At least his three sons were considered to be musically talented. Johann received early lessons from his father, who was his first music teacher. His father taught the boy organ, counterpoint, theory and harmony.

In 1726 young Krebs entered the Thomasschule in Leipzig, where he received general lessons in singing, violin, lute and keyboard playing. Krebs performed with the Bach choir in Thomasschule and remained a singer there until 1730. He was Bach’s pupil and received private organ lessons. Bach held Krebs in the highest regard, he punningly referred to him as the finest crayfish in his brook (their names Krebs “crayfish” and Bach “brook”). In 1735 Bach gave him a glowing letter of recommendation; nevertheless, Krebs found it difficult to obtain a patron or significant church post.

In 1735-1737 Krebs attended Leipzig University, also he was the harpsichord player in Bach’s collegium musicum. Over his career he held three organ posts, all in the vicinity of Leipzig. In 1737-1744 he serve as an organist at the Marienkirche in Zwickau, an ill-paid job playing an equally ill-maintained organ. In 1744-1756 he served at the castles of Zeitz, he tried unsuccessfully to become Bach’s successor. From 1756 to his death he served as an organist to the court of Prince Friedrich of Gotha-Altenberg. The organ was better, the court was more exalted, but the pay was little improvement.

Krebs left a substantial body of works for organ, the majority of them being chorale settings, but also including larger-scale preludes, toccatas, fugues and trios.  There are also several fantasias for organ and solo instrument.  Works for other keyboard instruments include suites and sonatas, mostly published during his lifetime. A substantial body of chamber and orchestral music also survives, including solo sonatas, sinfonias, and concertos for lute and keyboard.

Although highly regarded among his contemporaries, his compositions were considered old-fashioned and excessively complex, and quickly vanished from the repertory. They were only rediscovered at the beginning of the 20th century.