Jimmy McHugh (orig. James Francis McHugh) (born July 10, 1894, Boston, Massachusetts, U.S. – died May 23, 1969, Beverly Hills, California, U.S.) was an American composer, pianist, music publisher, one of the greatest and most prolific songwriters during the 1920s-1950s. McHugh wrote over 500 songs. His hit tunes include Carolina, I’m Coming Back to You, Comin’ In On a Wing and a Prayer, I Can’t Give You Anything But Love, Baby, Don’t Blame Me, On the Sunny Side of the Street, I’m In the Mood for Love, How Blue the Night, and Lost in a Fog. He also worked in the movies and received five Academy Award nominations. McHugh’s extensive work for Broadway and Hollywood included collaborations with Frank Loesser, Johnny Mercer, and especially Dorothy Fields.

James Francis McHugh was born in Boston, Massachusetts, on July 10, 1894. McHugh’s parents were James A. and Julia Ann Collins McHugh. His father ran a plumbing business and his mother was an accomplished pianist.

McHugh’s mother gave him his earliest lessons, and McHugh quickly fell in love with music. He also studied with Augustus Cuents, which led him to a job, at the Boston Opera House during his high school years and while he was attending Holy Cross Coll.

McHugh began his career in Boston, initially hired as an office boy at the Boston Opera House, he became a rehearsal pianist and was offered a scholarship to the New England Cons, of Music. McHugh eventually got a job as a song plugger for New York publishing houses, and wrote his first hit in 1916, Carolina, I’m Coming Back to You (lyrics by Jack Caddigan; 1916). During World War I he served in the Massachusetts 101st Cavalry. When the war was over, McHugh married, the couple had a son, but their marriage ended in divorce.

In 1921, McHugh moved to New York, where he began writing songs, and became a partner at Mills Music. McHugh began composing material for the shows at the Cotton Club shortly thereafter. In 1924, he had a success with one of his Cotton Club songs, When My Sugar Walks Down the Street (lyric by Gene Austin, with credit given to publisher Irving Mills). Another success from his Cotton Club years was I Can’t Believe That You’re In Love With Me (lyrics by Clarence Gaskell).

One of McHugh’s most important professional relationships began in 1927 when he met lyricist Dorothy Fields. Jimmy and Dorothy began writing together and in 1928 they had there a first big hit with the enduringly popular I Can’t Give You Anything But Love, Baby (written for the all-black Broadway revue Blackbirds of 1928). Other songs written by them for this show were Digga Digga Do, Doin’ the New Low-Down, and I Must Have That Man. 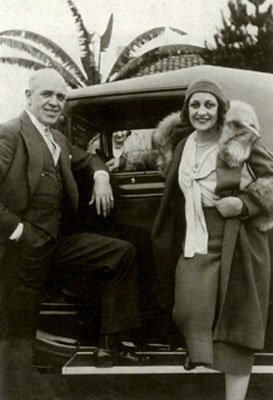 In 1930, they wrote, On the Sunny Side of the Street and Exactly Like You for Lew Leslie’s International Revue. The same year, this time for The Vanderbilt Revue, they wrote Blue Again. For a 1932 Chicago Revue called Clowns in Clover, Fields and McHugh wrote Don’t Blame Me. They wrote songs for the movies Love in the Rough in 1930, Singin‘ the Blues and Cuban Love Song in 1931, Dinner at Eight and Clowns in Clover in 1933, and Every Night at Eight (I’m in the Mood for Love) and Hooray for Love in 1935, among others. In 1936, McHugh and Fields wrote the score for Swingtime, including the songs A Fine Romance, Waltz in Swing Time, and the Academy Award-winning The Way You Look Tonight.

Another major collaborator for McHugh was lyricist Harold Adamson, with whom he wrote Dig You Later and Here Comes Heaven, for the 1945 film Doll Face. In addition to his partnerships with Fields and Adamson, McHugh occasionally collaborated with a number of lyricists, including Johnny Mercer, Ted Koehler, Ned Washington, and Frank Loesser.

McHugh’s last hit came in 1955 with Too Young to Go Steady. McHugh’s last work for motion pictures was in 1960 when he placed songs in the films Let No Man Write My Epitaph and Where the Hot Wind Blows and, with Pete Rugolo, wrote the score for Jack the Ripper.

Outside of songwriting and composing, in 1951 McHugh founded the Jimmy McHugh Polio Foundation, which became Jimmy McHugh Charities. Additionally, he was a member of the Board of Directors of the Beverly Hills Chamber of Commerce, serving from 1950 to 1952 as its president, and from 1960 until his death he was a Director of ASCAP.

Jimmy McHugh died from a heart attack in Beverly Hills, California on May 23, 1969.