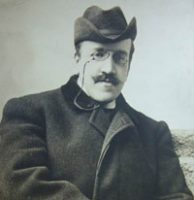 Vladimir Ivanovich Rebikov (born May 31 [May 19, O.S.] 1866, Krasnoyarsk, Siberia, Russia – died October 1, 1920, Yalta, Crimea) was a Russian composer and pianist. He is a founding figure among modern Russian musicians and a pioneer in the use of the whole-tone scale. Rebikov’s legacy includes 10 operas, 2 ballets, lyrical piano miniatures (suites, cycles, and albums), children’s choruses and songs. A melodious waltz from his children’s opera, The Christmas Tree (Yolka), is his most popular composition.

Vladimir Rebikov was born in Krasnoyarsk, Siberia, Russia, on May 31, 1866, into a family of a mining engineer.

In 1885, 19-year-old Rebikov tried to enter the Moscow Conservatory, where he presented his works at the entrance exams. The head of admissions was Sergei Ivanovich Taneyev, a student of Pyotr Ilyich Tchaikovsky. Taneyev did not approve of the compositions, calling them “modernist dissonances” and Rebikov was not allowed take the further exams.

Rebikov entered the philological faculty at the Moscow University. He completed a course in linguistics before entering the Moscow Conservatory, there he studied music theory with Nikolai Klenovsky, a student of Tchaikovsky. Then Rebikov devoted 3 years of hard work to the study of the foundations of musical art in Berlin and Vienna under the guidance of famous teachers K. Meyerberger (music theory), O. Jasch (instrumentation), T. Müller (piano).

Rebikov’s compositional career began in Odessa with his opera In the Storm (V grozu, Op. 5), which was produced in 1894. In Odessa, Rebikov began to teach, and he is known to have taught at the Philharmonic School in Moscow, Kiev, and Chișinău by 1898. In 1897, Rebikov organized a music school and a branch of the Russian Music Society in Chișinău. In 1898-1901, he travelled to Vienna and Berlin, bringing him into contact with music outside of Moscow. In Vienna and Berlin he familiarized himself with new schools of painting. After this period, he took up residence in Moscow (1901-1919), appearing as a pianist at home and abroad.

Rebikov’s early compositions were under the influence of Tchaikovsky, but around 1900 he began to be much more experimental. His use of whole-tone harmony earned him a reputation as the finest Russian impressionist, and he also became known as the father of Russian modernism.

His final theatrical work, The Nobleman’s Nest, Op. 55 (Dvorianskoe gnezdo; 1916), is a hyper-realistic setting of a Turgenev play where the vocal parts are speech-based and the music a mere underpinning to support the action.

Vladimir Rebikov spent his last year of life in the Crimea. He died in Yalta on August 4, 1920.