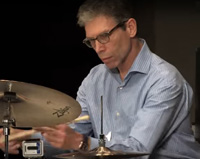 John Bernard Riley was born on June 11, 1954, Aberdeen, Maryland, U.S. into the family of John and Mary Ann Riley.

His parents were very supportive of his early love of drums, getting him a snare when he was eight years old. John played in the school band and began drum lessons with a good local teacher, Tom Sicola. While under Tom’s guidance, he gained control of the snare drum through work on the rudiments, reading and coordination. In 1971, John began studying with Joe Morello, after meeting him at a drum symposium. The same year he graduated from Scotch Plains-Fanwood High School.

Riley later attended University of North Texas College of Music, where he was introduced to a larger world of music and percussion. While at university, John played in, toured, and recorded with the famed One O’clock Lab Band.

Riley moved to New York City in September 1976 and in 1978 became a member of Woody Herman Band. John began freelancing with a wide spectrum of world-class musicians including Stan Getz, Milt Jackson, Miles Davis, Dizzy Gillespie, John Scofield, Bob Mintzer, Gary Peacock, Mike Stern, Joe Lovano, the Vanguard Jazz Orchestra, the Carnegie Hall Jazz Band, John Patitucci, Bob Berg, and many others. Riley had been subbing for Mel Lewis in the Mel Lewis Jazz Orchestra. When Lewis died in 1990, the orchestra decided to continue as the Vanguard Jazz Orchestra and Riley became its permanent drummer, a chair he has held for thirty-one years.