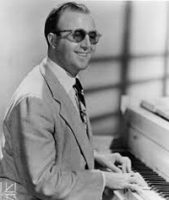 George Albert Shearing (born August 13, 1919, Battersea district of Southwest London, England – died February 14, 2011, New York City, U.S.) was a prominent pianist, composer and arranger for over five decades. He has written over 300 compositions, including the classic Lullaby of Birdland and Conception.

George Albert Shearing was born in 1919 in the Battersea area of London, being the youngest of nine children. He was born to working class parents: his father delivered coal and his mother cleaned trains in the evening having cared for her children during the day.

Shearing, who was born blind, began playing the piano at the age of three and began formal training at Linden Lodge School for the Blind, where he spent four years. While his talent won him a number of university scholarships, he was forced to refuse them in favour of a more financially productive pursuit, playing piano in a neighbourhood pub for the handsome salary of $5 a week. Shearing joined an all-blind band in the 1930’s.  At that time he developed a friendship with the noted jazz critic and author, Leonard Feather. Through this contact, he made his first appearance on BBC radio.

In 1947, Shearing emigrated to New York City, where he spent two years establishing his fame on this side of the Atlantic. One of his first performances was at the Hickory House. He performed with the Oscar Pettiford Trio and led a jazz quartet with Buddy DeFranco, which led to contractual problems, since Shearing was under contract to MGM and DeFranco to Capitol Records.

With his unique sound commanding national attention, in 1949 Shearing formed his first and most famous quintet, comprised of Marjorie Hyams on vibes, Chuck Wayne on guitar, John Levy on bass, and Denzil Best on drums. An instant success on the national level since the quintet’s debut, Shearing began performing at the most respected venues of the era, including the legendary Birdland jazz club in New York, and became one of the most popular recording artists in the United States.

Recording briefly first for Discovery, then Savoy, Shearing settled into lucrative associations with MGM (1950-1955) and Capitol (1955-1969), the latter for which he made albums with Nancy Wilson, Peggy Lee, and Nat King Cole. He also made a lone album for Jazzland with the Montgomery Brothers (including Wes Montgomery) in 1961, and began playing concert dates with symphony orchestras.

In 1956, Shearing became a naturalized citizen of the United States. He continued to play with his quintet, with augmented players through the years, and recorded with Capitol until 1969. He created his own label, Sheba, that lasted a few years. Along with dozens of musical stars of his day, Shearing appeared on ABC’s The Pat Boone Chevy Showroom. Earlier, he had appeared on the same network’s reality show, The Comeback Story, in which he discussed how to cope with blindness.

In the ’70s, his profile had been lowered considerably, but upon signing with Concord in 1979, Shearing found himself enjoying a renaissance in all kinds of situations. He made a number of acclaimed albums with Mel Tormé, raising the singer’s profile in the process, and recorded with the likes of Ernestine Anderson, Jim Hall, Marian McPartland, Hank Jones, and classical French horn player Barry Tuckwell.

He also recorded a number of solo piano albums where his full palette of influences came into play. He signed with Telarc in 1992 and from that point through the early 2000s continued to perform and record, most often appearing in a duo or trio setting.

Shearing, who had remained largely inactive since 2004 after a fall in his New York City apartment, died of congestive heart failure at New York’s Lenox Hill Hospital on February 14, 2011. He was 91.

Horatio Alger Award for Distinguished Americans, 1978; Grammy Awards with Mel Tormé for best jazz vocal performance for An Evening with Mel Tormé & George Shearing, 1982, and for Top Drawer, 1983; Ivor Novello Award for Lifetime Achievement, May 1993; invested an Officer of the Order of the British Empire, November 26, 1996; received the first American Music Award by the National Arts Club in New York City, March 1998.