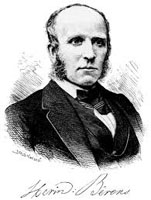 Johann Hermann Berens (born April 7, 1826, Hamburg – died May 9, 1880, Stockholm), a noted German-Swedish pianist, composer and teacher. Born in Germany, Berens made a name for himself as a pianist in Sweden, playing in chamber music concerts in Stockholm.

Hermann Berens was born in Germany into the family of a German flutist Carl Berens, who was his first teacher. Later Hermann studied piano and composition with Carl Gottlieb Reissiger in Dresden. After a concert tour across Germany with the singer Marietta Alboni in 1845, Hermann lived in Hamburg exclusively for composing. In 1847 he moved to Sweden where he taught at the Royal Academy in Stockholm. In 1849 Berens became music director in Örebro. In 1860 he was appointed Kapellmeister at the Mindra Teatern and then he held the similar position at theatre Dramaten. In 1861 Berens was appointed a teacher of composition at the Stockholm Conservatory, since 1868 he was a professor of composition and instrumentation. Berens composed his opera Violetta and three operettas Der Sommernachtstraum (A Midsummer Night’s Dream) by William Shakespeare, Lully and Quinault (1859) and Riccardo (1869).

Hermann Berens gained mainly his popularity as a teacher and the author of the instructive pieces for piano and collection of piano etudes (Neueste Schule der Geläufigkeit, op. 61, and Pflege der linken Hand, op. 89). His book of piano studies has become a standard work for piano students.