Andrei Yakovlevich Eshpai (born May 15, 1925, Kozmodemyansk, Mari Autonomous Region (now the Republic of Mari El), Russia – died November 8, 2015, Moscow, Russia) was a Soviet and Russian composer, pianist, teacher, professor, actor, songwriter and public figure, People’s Artist of the USSR (1981), laureate of the Lenin Prize (1986) and the USSR State Prize (1976). He composed the ballets Angara and Circle (Krug), the operettas No One is Happier than Me (Net menya schastliveye), and Love is Forbidden (Lyubit’ vospreshchayetsya). Eshpai wrote compositions for soloists, chorus and orchestra. He was the author of 9 symphonies.

Andrei Eshpai was born on May 15, 1925 in Kozmodemyansk, Mari Autonomous Region (now the Republic of Mari El). His father, Yakov Andreevich Eshpai, was a composer and musicologist and folklorist. Yakov Andreevich together with his cousin, Ivan Palantai, was the founder of the Mari professional music. Andrei Eshpai’s mother, Valentina Konstantinovna Togaeva, was a teacher of the Russian language and literature and a sister of the Chuvash composer Anatoly Nikolaevich Togaev.

In 1928, the family moved to Moscow, where Andrei grew up. Initially, Andrei Eshpai studied music under the guidance of his father. At the age of 4, Eshpai began to write his first compositions. He noted that Mari musical tradition had a very strong influence on his further creativity.

In 1941, he graduated from the Gnessin Seven-Year School, class of V.V. Listovoy. During the evacuation, he studied at secondary school №1 in the city of Mariinsky Posad, which he later considered his second homeland and often visited.

With the outbreak of the Great Patriotic War, he expressed a desire to go to the front as a volunteer, but due to his age he was not accepted. In 1943, he entered the Chkalovsk (Orenburg) machine-gun school, graduated from the courses of military translators at the Military Institute of Foreign Languages of the Red Army. From the end of 1944 he fought on the 1st Belorussian Front. Eshpai worked as a military translator. 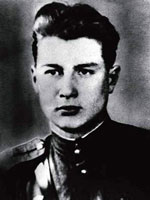 Andrey Eshpai as a young man

Andrei Eshpai composed the ballets Angara (based on the play by A. N. Arbuzov Irkutsk Story) and Circle (Krug), the operettas No One is Happier than Me (Net menya schastliveye), and Love is Forbidden (Lyubit’ vospreshchayetsya).

In 1957 he played a small role in the film The Story of First Love. 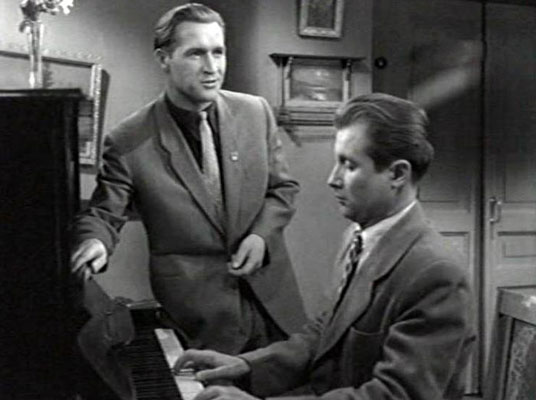 Composer Andrey Eshpai in the film The Story of First Love

Eshpai performed as a pianist playing his compositions. His music was playing all over the world. The last premiere, his Fifth Symphony, was in Germany.

In 1965-1970, he worked as a professor teaching composition at the Moscow Conservatory. Eshpai was a chairman of the jury of many international and all-Russian competitions, including The International Tchaikovsky Competition, All-Russian A.P. Petrov Competition (St. Petersburg). 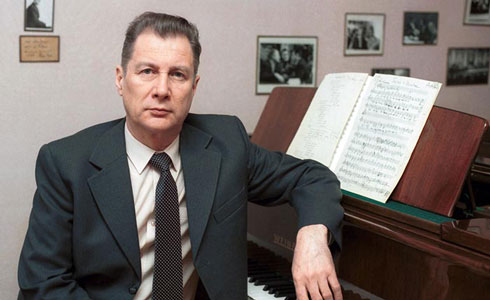 Andrei Eshpai at the piano

His wife,  Alexandra Mikhailovna Eshpai, was a pianist, worked as the head of the piano music department at the Kompozitor Publishing House. The eldest son, Valentin Andreevich Eshpai (1953-2016), was a film critic, specialist in contemporary American cinema. His grandson, Valentin Eshpai, is a cameraman. The youngest son, Andrei Andreevich Eshpai (born April 18, 1956), is film director, married to actress Evgenia Simonova. His granddaughter, Maria Eshpai, is a pianist. 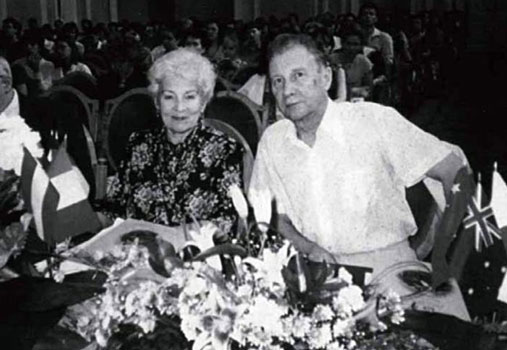 Andrei Eshpai and his wife Alexandra

Andrei Eshpai died on November 8, 2015 in Moscow, as a result of a stroke. He was buried at the Novodevichy cemetery.