Nikolai Yakovlevich Myaskovsky (born April 20 [April 8, O.S.], 1881 – died August 8, 1950), was a Russian composer, music critic, teacher, public figure, one of the founders of the Association for Contemporary Music (ACM) in Moscow. He was a prolific writer of symphonies, eventually Myaskovsky composed 27 symphonies (plus three sinfoniettas, three concertos and works in other orchestral genres), a number of works for chamber ensembles, 13 string quartets, 9 piano sonatas as well as many miniatures and vocal works. Aram Khachaturian and Dmitry Kabalevsky were among his notable students. His generosity as a teacher earned for him the nickname “the musical conscience of Moscow.” 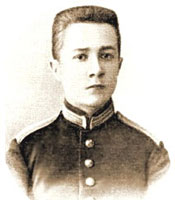 Nikolai Myaskovsky as a young man

Nikolai Myaskovsky was born in Novogeorgievsk (present-day Modlin), a Russian army fortress situated near Warsaw, Poland, which was then a part of the Russian Empire. Nikolai was the second child of a military engineer, Yakov Konstantinovich and his wife Vera Nikolayevna Myaskovsky. Later, his father attained the rank of general in the Russian army. Nikolai had an elder brother Sergei (1877), who died of tuberculosis as a teenager, and three sisters – Vera (1885), Valentina (1887) and Eughenia (1890). After their mother’s death in 1890, the children were brought up by their father’s sister, Yelikonida Konstantinovna Myaskovskaya, who had been a singer at the Saint Petersburg Opera. Yelikonida Konstantinovna was his first musical teacher and she encouraged his musical interests. Though he learned piano and violin, he was discouraged from pursuing a musical career, and entered the military.

The Myaskovskys lived at Novogeorgievsk until 1888, Orenburg near Kazakhstan from 1888-1889, and Kazan in central European Russia from 1889-1893. Nikolai, as was expected, received his preliminary and secondary education in military schools, including at Nizhni Novgorod and St. Petersburg.

In 1895, when Nikolai was 14 the family moved to St. Petersburg. The family tradition led him to the choice of his profession.  Myaskovsky’s father wanted his son to follow in his footsteps. From 1899 to 1902, Myaskovsky studied at the Military Engineers’ School, after which he served in the military in Moscow and St. Petersburg until 1908. At the same time, he studied harmony with the composer Reinhold Gliere in Moscow (Myaskovsky had been referred to Gliere by Sergei Taneyev, a composer and teacher at the Moscow Conservatory) and with Ivan Kryzhanovsky in St. Petersburg (Kryzhanovsky played an important role, he introduced the young officer to the circle of the Evenings of New Music, the gatherings of the St. Petersburg’s enthusiasts of the modern music). Before Myaskovsky’s conservatory tenure, he had written piano pieces and songs for piano and voice, little of this work was performed or published.

In 1908, Myaskovsky was able to resign from the Military Engineers’ School and enter the St. Petersburg Conservatory to study with Anatoly Konstantinovich Lyadov and Nikolai Rimsky-Korsakov, graduating in 1911. Myaskovsky disliked professor Lyadov, though he was a good academic but an unpleasant man and he hated the music of Edvard Grieg. For that reason, Myaskovsky wrote his String Quartet No. 3 based on a theme from Grieg. Also at that time, his works began to be performed in concert and to be published; these works included his First Symphony (1908), his Sinfonietta (1910), Silence (Molchaniye; 1909), the symphonic parable by Edgar Allan Poe, it is a very powerful and dramatic piece, two string quartets, a sonata and other pieces for piano, and a number of vocal works. 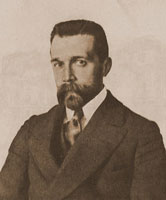 Myaskovsky’s lifelong friendship with Sergei Sergeyevich Prokofiev began at the conservatory. They worked together at the conservatory on at least one work, a lost symphony, parts of which were later scavenged to provide material for the slow movement of Prokofiev’s Piano Sonata No. 4.

In 1911, Myaskovsky graduated and afterwards taught in St. Petersburg, where he also developed a supplementary career as a penetrating musical critic. From 1911 to 1914, he was a critic for a music periodical Muzyka.

World War I and loss of the family members 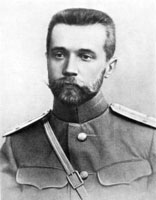 Myaskovsky participated in World War I, serving on the front for three years, then worked on military fortifications. He was wounded and suffered shell shock. During this time as a soldier he wrote parts of his Symphony No. 4 (Op. 17, in E minor) and Symphony 5 (Op. 18, in D major), some of his experiences are reflected in them. Just before the war began, his brother-in-law, the husband of his sister Valentina Yakovlevna, had committed suicide due to money worries. In the winter of 1918-1919 Myaskovsky’s father, an ex-Tsarist general, was murdered by Red Army soldiers while waiting for a train, in the winter of 1919–1920 his aunt died, to whom he was closely attached. During 1917 to 1921 Myaskovsky served in the Red Army. After the Great October Socialist Revolution, he worked on the Naval General Staff. In 1921 he was demobilized, and he went to live in Moscow.

In 1921, Myaskovsky became a professor of composition at the Moscow Conservatory, a position he held until his death. He trained about 70 composers, among his notable students were Aram Khachaturian, Dmitry Kabalevsky, Rodion Shchedrin, and Alexander Mosolov. He was loved as a professor and known for his generosity. His generosity as a teacher earned for him the nickname “the musical conscience of Moscow.” He held this position until 1931. He also was appointed assistant director of the music department of the People’s Commissariat (1921-1922) and editor at the Music Publishing House (1922-1931). In 1923 he became one of the founders of the Association for Contemporary Music (ACM) in Moscow and in the early 1930s he abandoned it. In later years, he would become a consultant for music broadcasts for the All-Union Radio Committee. From 1932 to 1948, Myaskovsky was a member of the organizational committee of the Union of Soviet Composers. 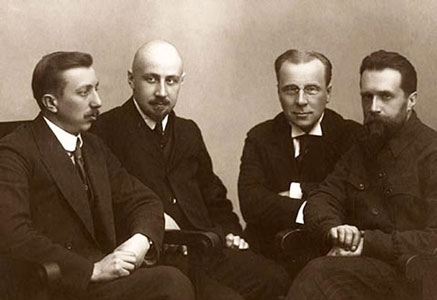 As with many other Russian composers, Myaskovsky wrote patriotic music in order to please the Soviet authorities. With his Symphony No. 6 (composed between 1921 and 1923), nationalistic themes entered his music. It is a masterpiece and the first really great Russian symphony. Symphony No. 6 is the largest and most ambitious of his 27 symphonies, the Symphony’s fourth movement is an evocation of the Russian Revolution. Symphony No. 12 (composed between 1931 and 1932), written in commemoration of the 50th anniversary of the Revolution, was his first explicitly Soviet work, with its portrait of the past, present, and future of a Russian village. Myaskovsky received an honorary Doctor of Arts degree from the Moscow Conservatory in 1940.

In spite of his patriotic compositions, Myaskovsky was criticized alongside other great Russian composers Shostakovich and Prokofiev for his modernism and formalism in 1948. Myaskovsky was not harshly persecuted and in fact won three Stalin Prizes. 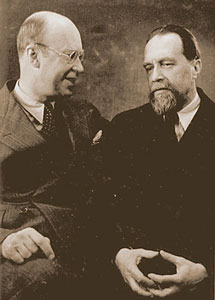 Nikolai Myaskovsky died of cancer in Moscow on August 8, 1950 at the age of 69. He was buried in Novodevichi Cemetery near to the graves of Taneyev and Scriabin. Myaskovsky wrote a large body of work and taught an entire generation of Soviet musicians. After his death he was praised by the Soviet authorities as an “outstanding Soviet musical worker and people’s artist.”