Aram Khachaturian was born in Kojori, suburb of Tiflis (now Tbilisi, Georgia), on June 6, 1903, to an Armenian family. His father, Ilya (Yeghia) Khachaturian, was a bookbinder and his mother, Kumash Sarkisovna, was a housewife. The family had 5 children, one daughter and four sons, of whom Aram was the youngest. His mother’s singing and other folk music in Tiflis was Khachaturian’s first experience of music. This Armenian folk tradition later inspired some of his music. 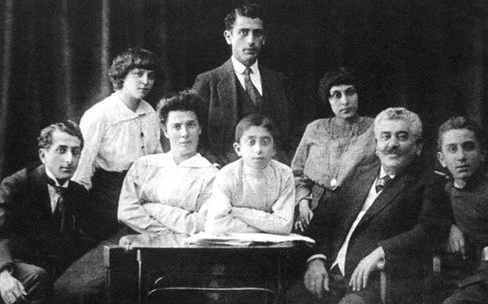 During his youth, Khachaturian possessed a strong fascination for music but never studied it or even learned to read it. Music was not on his mind at the Tiflis Commercial College where he debated between a career in medicine or engineering. 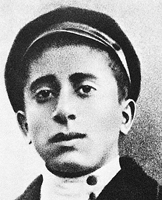 Aram Khachaturian as a young man

In 1921, Khachaturian, then 17, went to Moscow with his eldest brother, Suren, who was the stage director of the Moscow Art Theatre. Influenced by his brother’s work in Moscow, Khachaturian fell under the magic spell of the music world. He began to study biology at Moscow University alongside Khachaturian took cello lessons at the Gnesin Music School. Although he had almost no musical education, Khachaturian showed such great talent that he was admitted to the Gnesin Institute where he studied cello under Mikhail Gnesin and entered a composition class (1925). During this period, Khachaturian wrote his first works. He wrote a suite for viola and piano, Toccata, Seven Fugues for Piano. Sergei Prokofiev organized the premiere for the Piano, Violin and Clarinet Trio in Paris. Prokofiev highly appreciated the talent of the young composer. In 1926, Khachaturian wrote the Dance Suite for violin and piano and in 1927 he wrote the Poem in C Sharp Minor. In 1929, Khachaturian entered the Moscow Conservatory to study composition under Nikolai Myaskovsky and orchestration under Reinhold Glier and Sergei Vasilenko. Khachaturian graduated from the conservatory in 1934 and went on to complete his graduate work in 1936. 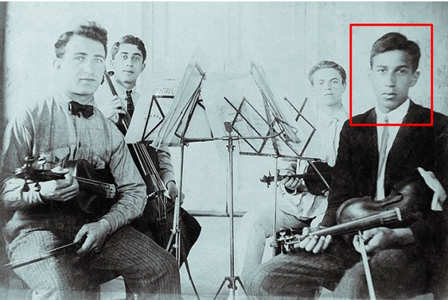 Aram Khachaturian in his student years 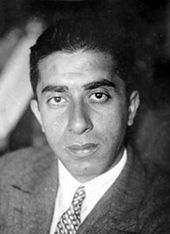 Having himself been born and brought up in Georgia, Khachaturian’s formative musical influence had not been so much Armenian as a trans-Caucasian mix of Georgian, Armenian and Azerbaijani folk and urban songs and dances. Intending to write an ‘Armenian ballet’, Khachaturian therefore spent much of 1939 in Armenia, the land of his ancestors. The ballet which eventually emerged, after a false start as a work called Happiness (1939), was Gayane, including the celebrated Sabre Dance. Gayane was the story of a young Armenian woman whose patriotic convictions conflict with her personal feelings on discovering her husband’s treason. Gayane was written in 1941-1942, with revisions (mainly to the plot) in 1952 and 1957. It premiered at the Kirov Ballet on December 9, 1942, in wartime. One year later, Khachaturian joined the Communist party, but this did not save him from government punishment, asserting that his music was anti-people and formalist and in 1948, he was put on the Black List.

In 1941, Khachaturian wrote Masquerade as incidental music for a production of the play of the same name by Russian poet and playwright Mikhail Lermontov, written in 1835. Based on a real incident, set in 1830s St. Petersburg aristocratic society. The play tells the story of a world-weary aristocrat who, suspicious of his wife’s adultery, becomes consumed by jealousy, murders her and is driven to insanity upon the revelation of her innocence.

Khachaturian’s Symphony No. 2 (1943), subtitled The Bell, was written for the 25th anniversary of the Russian Revolution. Although it took Khachaturian only two months to write, the composer would revise it many more times. 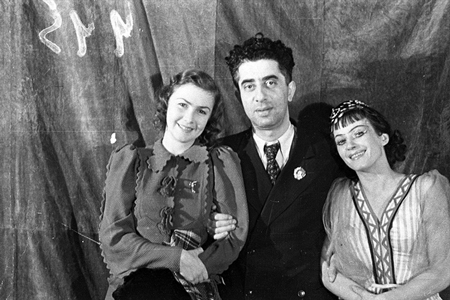 The Symphony No. 3, subtitled Symphony-Poem, was composed in 1947. This work was intended “to express the Soviet people’s joy and pride in their great and mighty country” on the occasion of the 30th anniversary of the Russian Revolution. It premiered in Leningrad on December 13 by the Leningrad Philharmonic conducted by Yevgeny Mravinsky.

In 1948, along with Dmitry Shostakovich and Sergey Prokofiev, Khachaturian was accused by the Central Committee of the Communist Party of bourgeois tendencies in his music. He admitted his guilt and was restored to prominence. After Joseph Stalin’s death in 1953, however, he publicly condemned the Central Committee’s accusation, which was formally rescinded in 1958.

Khachaturian composed the ballet Spartacus in 1954, based on the true story of a slave uprising against the Romans. The ballet was choreographed by Leonid Yakobson and premiered in on December 27, 1956 at the Kirov Theatre in Leningrad. The orchestral composition consists of four suites; however, it was cut down to three acts for the ballet, and the order of some of the pieces was changed. 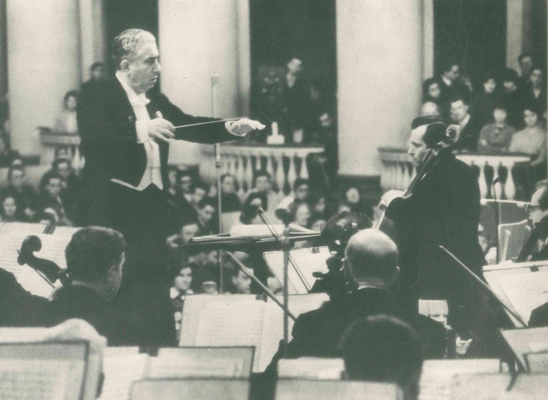 Khachaturian also composed the music for the Armenian national anthem as well as film scores and incidental music. He was named People’s Artist of the Soviet Union in 1954 and was awarded the Lenin Prize in 1959. As one of the most prominent Soviet composers of his time, he played a role in the continuing struggle between the Communist Party and artists who wished to express themselves without hindrance. Khachaturian was ‘liberal’ in this battle. He was the most renowned Armenian composer of the twentieth century, and the first composer of Armenian ballet music. 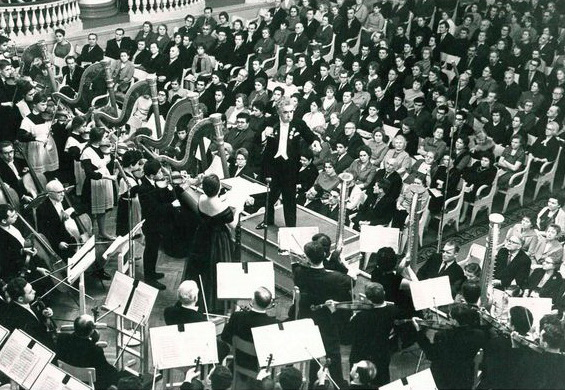 Concert in honour of the 60th anniversary of Aram Khachaturian December 18, 1963 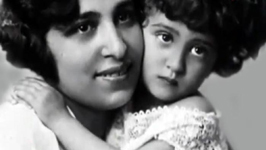 Khachaturian’s private life was rich in events. He was married twice. His first wife was Ramel, an Armenian woman. They got married in the late 1920s. Khachaturian had a daughter Nune from the first marriage, she was a pianist.

In 1933, Khachaturian got married for the second time to Nina Makarova, a student from Myaskovsky’s class, who’d become a faithful helpmate of the composer. They had a son, Karen, born in 1942, who became an actor. 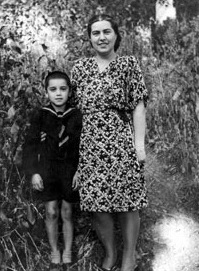 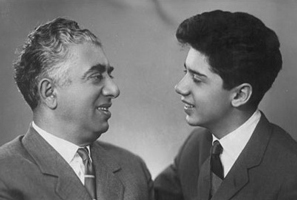 Aram Khachaturian with his son Karen