Sergei Prokofiev was born on April 23, 1891 in the village of Sontsovka, Russian Empire at the time, now the village is known as Krasnoe in the Donetsk Oblast in Ukraine. Prokofiev’s father, Sergei Alexeyevich Prokofiev, was an agronomist and his mother, Mariya Zitkova, was an amateur pianist, though born a serf, she was a well-educated woman with a broad knowledge of the arts. 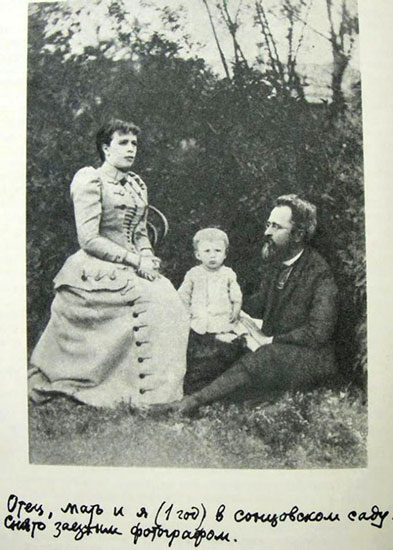 Sergei Prokofiev with his parents

Prokofiev was the only child in the family (his sisters had died in infancy), he lived a comfortable and privileged life. The future composer grew up surrounded by classical music, he picked up a love of playing the piano and of composing music from his mother. She became his first mentor in music, she encouraged and taught him to play the piano. His musical ambitions were fuelled by hearing his mother playing Chopin and Beethoven in the evenings. He began piano lessons at age four and it was quickly apparent that the boy had a talent for composition.  From earliest childhood Prokofiev composed music, he composed his first piano piece at the age of 5, an Indian Gallop (Indiyskii galop). 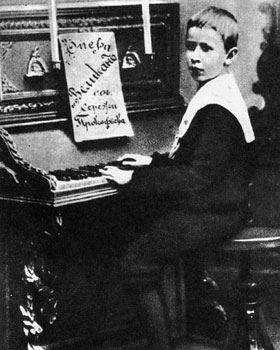 His mother supervised his early arts education and took him to many opera performances in Moscow and St. Petersburg, in 1899-1900, where he saw his first operas, notably Gounod’s Faust, Borodin’s Prince Igor, Glinka’s A Life for the Tsar, Verdi’s La Traviata, and Bizet’s Carmen). This experience had such a profound effect on nine-year-old Sergei that when returned home he immediately wrote one his own opera The Giant (Velikan).

During the summer months of 1902-1903, he took piano, theory, and composition lessons from Reinhold Glière, a young composer from Kyiv who prepared Prokofiev for entrance into the conservatory at St. Petersburg. When Glière arrived at Sontsovka, he was 28 years old, and Prokofiev was 11. Glière and his student got along well.

In the autumn of 1904 the thirteen-year-old Prokofiev passed the entrance exams for the St. Petersburg Conservatory where such greats as Alexander Winkler (piano), Anatoly Lyadov (harmony and counterpoint), Nikolai Tcherepnin (conducting), Nikolai Rimsky-Korsakov (orchestration) and taught and where students twice his age were studying. Prokofiev became lifelong friends with Nikolai Myaskovsky.

The years (1904–1914) Prokofiev spent at that institution were a period of swift creative growth. Prokofiev was viewed as eccentric and arrogant, he boldly expressed his dissatisfaction with much of his conservatory education. He criticized other students and rejected criticism of others toward himself, this resulted in him earning the reputation of an enfant terrible. Prokofiev’s first public performance was in 1908 when he performed as a pianist at Evenings of Contemporary Music, a concert series in St. Petersburg. Although he received his diploma in composition in 1909 with average marks and could have elected to leave the institution, he decided to continue at the conservatory as a piano student. When he graduated he was awarded the Anton Rubinstein Prize in piano for a brilliant performance of his own first large-scale work – the Piano Concerto No. 1 in D-flat Major.

In 1914, Prokofiev traveled to Paris and to London where he heard Igor Stravinsky’s Rite of Spring, Petrouchka, and Firebird Suite as well as Maurice Ravel’s Daphnis et Chloe. When travelling to Europe, Prokofiev met many influential figures. Prokofiev was introduced to the famous impresario of the Ballet Russes, Sergei Diaghilev, who became one of his most influential advisers for the next decade and a half. Prokofiev played his Second Piano concerto for him. Prokofiev created four ballets Ala and Lolli, Chout (The Buffoon), Le pas d’acier (The Steel Step), and Le Fils prodigue (The Prodigal Son) for Ballet Russes. 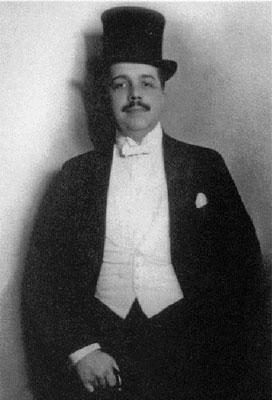 Prokofiev returned to the St. Petersburg Conservatory, studying organ to avoid the draft for World War I. He composed The Gambler based on the novel of the same name by Fyodor Dostoyevsky. The opera was written at the request of the Mariinsky Theater. After the February Revolution of 1917, budget and administrative difficulties in the theatre led to a decision to remove The Gambler from the theatre’s repertory plans. In the summer of that year, Prokofiev introduced Neo-classical ideas into his own music, he produced his first symphony, the Classical. It was premiered on April 21, 1918 in Petrograd (now St. Petersburg).

Emigration to the USA

In the autumn of 1918, Prokofiev emigrated to the USA, where he was well received as a pianist but met considerable criticism as a composer. In New York City the sensational piano recitals evoked both delight and denunciation. Despite this, Prokofiev settled down in America. Being in financial difficulties, and not wanting to return to Russia, Prokofiev left for Paris where he reaffirmed contacts with Diaghilev’s Ballets Russes. In Paris, Prokofiev completed some of his unfinished works, such as Third Piano Concerto. The Love for Three Oranges was completed in 1919, though it was premièred in Chicago Opera on 30 December 1921.

Prokofiev first met his future wife Carolina Codina in New York, after one of his performances in Carnegie Hall in 1918. She was an amazingly beautiful and extravagant Spanish-born singer who went under the stage name of Lina Llubera. 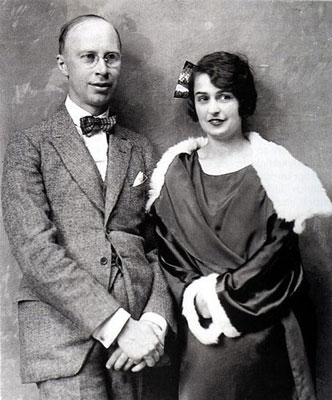 She was born in Madrid, but raised in Brooklyn, New York. They married in October 1923 in Ettal, Germany and lived in Paris through the 1920’s and 1930’s. Prokofiev formed romantic attachments in different countries during his tours. Their marital relations growing more strained every day. The couple had two sons, Oleg and Svyatoslav, yet things got even more difficult when Sergei insisted that they move permanently to the Soviet Union in 1936. Living in Moscow at the start of the Great Terror was no easy task. 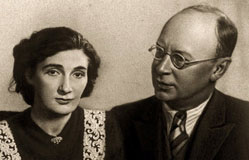 In 1941 Prokofiev separated from Carolina and their two sons and lived openly with the twenty-five-year-old Mira Mendelson throughout the World War II years; she acted as his companion, secretary, librettist, and literary advisor. The couple stayed together until the composer’s death.

Adapting to Stalinist political realities, Prokofiev had to write patriotic stage works and other music designed for ‘the people.’ He wrote a series of mass songs (Opp. 66, 79, 89), using the lyrics of officially approved Soviet poets.

In the years preceding World War II, Prokofiev created a number of classical masterpieces such as Lieutenant Kije suite (1934), the Egyptian Nights suite (1934), the ballet Romeo and Juliet (1935), Violin Concerto No. 2 in G Minor (1935), a symphonic children’s fairy-tale Peter and the Wolf (1936), an opera Semyon Kotko (1939), monumental Cantata for the 20th Anniversary of the October Revolution (1937), on texts by Karl Marx, Vladimir Lenin, and Joseph Stalin, and the cantata The Toast (1939), composed for Stalin’s 60th birthday, opéra bouffe Betrothal in a Monastery (composed in 1940, produced in 1946).

In 1938, Prokofiev collaborated with Sergei Eisenstein on the historical epic Alexander Nevsky, some of his most inventive and dramatic music. This cantata was based on the music of the film. 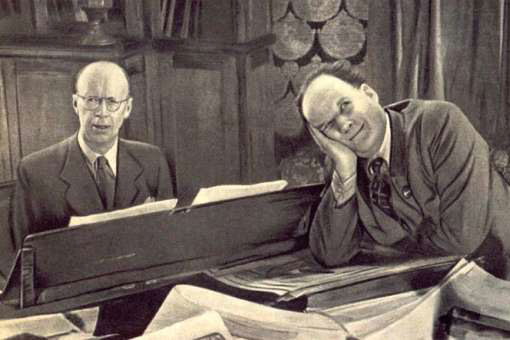 Prokofiev and Eisenstein working on the production of Alexander Nevsky

Prokofiev produced propaganda music, but also violin sonatas, his War Sonatas for piano, the String Quartet No. 2, the ballet Cinderella (1940-1944), and the opera War and Peace (1941-1943; revised 1946-1952), based on the 1869 novel of the same name by Leo Tolstoy, its Russian libretto was prepared by Prokofiev and Mira Mendelson. Prokofiev was already considering making an opera when Germany invaded Russia on 22 June 1941. The conflict spurred him on and he took two years to compose his original version.

Prokofiev’s last opera was The Story of a Real Man, written from 1947 to 1948, based on the true story of an injured pilot who became a war hero. In 1948, with the resolution that criticized almost all Soviet composers, several of Prokofiev’s works were banned from performance. Prokofiev continued to compose right up to his death.

Prokofiev had suffered severe concussion in a fall in 1945, with permanent effects on his health, and his precarious physical condition combined with political disfavour to make his last years unhappy ones. Prokofiev’s life ended at the age of 61, on March 5, 1953, the same day as Joseph Stalin. His death was unreported for a few days. As the throngs gathered to mourn Stalin, it was impossible to carry Prokofiev’s body out of his home for burial. No flowers were available to dress the coffin – they had all been commandeered for the Stalin’s funeral – but neighbours donated potted plants.