Jacques Offenbach (born June 20, 1819, Cologne, Prussia (Germany) – died October 5, 1880, Paris, France), was a French composer of German origins who wrote some of the most attractive and melodious music for the stage during the middle years of the 19th century. He created a type of light burlesque French comic opera known as the opérette, which became one of the most characteristic artistic products of the period. Offenbach’s many operettas are outstanding examples of the genre, while his opera Les Contes d’Hoffmann (Tales of Hoffmann) remains a staple of the international repertory. Several operettas continue to keep a place in the repertory, notably Orphée aux enfers (Orpheus in the Underworld) and La belle Hélène (The Beautiful Helen) which, though based on ancient myth, mercilessly satirise Napoleon III’s Second Empire and Parisian society of the day.

Offenbach was born Jacob (or Jakob) Offenbach to a Jewish family, in Cologne on June 20, 1819. He was the seventh of ten children born to a musical father, Isaac Juda Offenbach né Eberst and his wife Marianne, née Rindskopf. Offenbach’s father worked as a cantor at the Cologne Synagogue, who had been born at Offenbach am Main. The father was known as “Der Offenbacher,” and the composer was known only by his assumed name, Offenbach.

When Jacob was six years old, he took first violin lessons from his father. At the age of nine his focus turned to the cello, possibly to become the third member of a family trio: his brother Julius was already proficient on the violin, and his sister Isabella was a good pianist. Jacob studied with local teachers and performed in restaurants with a brother and sister. His first composition teachers in Cologne were Joseph Alexander and Bernhard Breuer.

In 1833, Jacob published his first composition. In November of the same year, attracted by Paris’s more tolerant attitude toward Jews, Offenbach’s father took Jacob and another son Julius to Paris for further training and for the musical opportunities offered there. It was during his early years there that he adopted the French version of his name, “Jacques.” The young German was accepted at the Paris Conservatoire, but he soon became impatient with formal lessons, and after only a year Offenbach left the Conservatoire to become a practical musician. 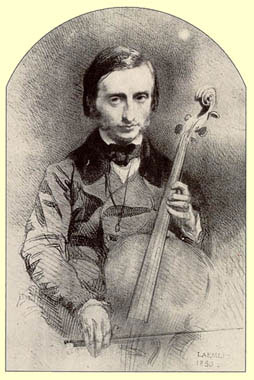 Offenbach as a young cello virtuoso, drawing by Alexandre Laemlein from 1850

After leaving the Conservatory, Offenbach took further lessons on the cello from Louis Norblin, but, more importantly, studied composition with Halévy. During this period he supported himself by playing in the Opéra-Comique orchestra, gave music lessons, and copied music manuscripts. During this time he composed a number of short waltzes including Rebecca, a waltz based on 15th century Hebrew melodies, debuted at the Jardin Turc Theater.

By 1838, when he left his orchestral post, he had become one of the finest cellists in Europe and began performing with Flotow, who played the piano. Although he had been composing small pieces since his childhood, Offenbach began writing larger works now, like the score for the comedy, Pascal et Chambord, premiered in 1839. In March of 1839, Jacques received his first commission for a musical score. In the early 1840’s, he continued as a cello virtuoso and travelled throughout France, Germany and England and performed with noted musicians and composers Anton Rubenstein and Franz Liszt.

By 1848, Offenbach had conducted an orchestra in a Parisian theatre and had established himself as a composer of dance music. Later that same year, he returned to Germany with his wife and daughter to avoid revolutionary violence in France, but returned to Paris in 1849 to be the conductor at the Theatre Francaise, but was anxious to gain more recognition as a composer. Offenbach spent the summer of 1853 in Cologne with family to build his strength in order to win commissions and performances. Originally intended to be entitled Vertigo, Pépito received its premiere at the Théâtre des Variétés in Paris on October 28, 1853.

In 1855, Offenbach opened his own theatre, the Bouffes-Parisiens, which he directed until 1866 and where he gave many of his celebrated operettas, among them Orphée aux enfers (Orpheus in the Underworld; 1858), which was a great success in 1858 and paved the way for his subsequent larger operettas. He then produced operettas at Ems in Germany and an opéra-ballet in Vienna, Die Rheinnixen (Rhine Spirits; 1864). In 1857, Offenbach’s entire theatre company travelled to London, England to perform for eight weeks at the St. James Theatre. His brother, Jules, conducted the orchestra and travelled with the company to London.

The 1870’s marked a period of decline in the popularity of Offenbach’s works as public taste shifted after the Civil War of 1870-1871. In 1873, he took over management of the Théâtre de la Gaîté, where he re-released two of his most popular operettas, Orphée aux enfers and Geneviève de Brabant. Offenbach was burdened with heavy debt as the result of several bad business investments, and in 1874 he was forced to declare bankruptcy.

In 1876, he undertook an American tour conducting concerts in New York and Philadelphia 1876 and gave 40 concerts. His American tour resulted in a book that documented his experiences entitled, Offenbach in America (1877).

Les Contes d’Hoffmann (The Tales of Hoffmann), was more serious than his other works, perhaps reflecting the eternal wish of the clown to be taken seriously. It was still unfinished at his death in 1880, but was completed by his friend Ernest Guiraud and premiered in 1881. 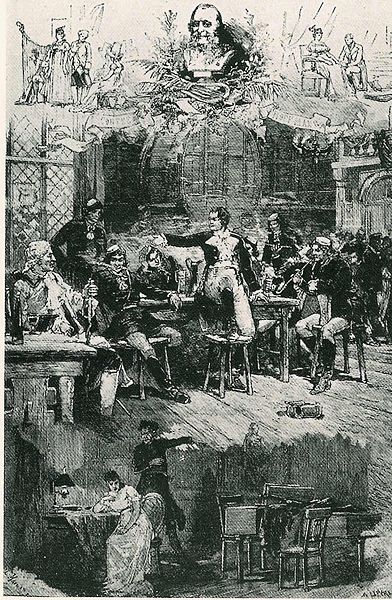 Scene from The Tales of Hoffman

Jacques became a familiar figure in the best salons in Paris. And at one of these cultured gatherings, his eyes fell upon a young Spanish woman by the name of Marie Manuela Hérminie d’Alcain. Offenbach fell in love with her. Hérminie was barely 15 years of age but Jacques was determined to marry her. However, before he could marry Hérminie he needed to be financially secure. Offenbach dedicated a waltz to her in 1841, and a Romanze in 1843 as well. However, her family was not convinced that the young cellist was in any financial position to proposed marriage. Offenbach carried out a concert tour of Cologne, Paris and London. Here he played for Queen Victoria and Prince Albert at Windsor. He returned with a newfound reputation and wealth and a letter of appreciation from King Louis Phillipe. Offenbach’s next obstacle was to change his religion and become a Roman Catholic. He married at the age of 25 and their marriage was happy and lifelong, producing four daughters and a son Charles Ignace Auguste, who followed in his father’s compositional footsteps. Sadly, Auguste died of tuberculosis at the age of 21. 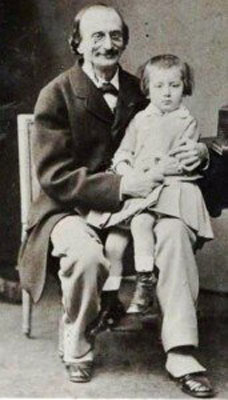 Jacques Offenbach and his son Auguste

Offenbach suffered from gout in the 1860s and continued to work until his death on 5 October 1880. He died of heart failure at the age of sixty-one as a result of acute gout.  He was given a state funeral at which some of his music was played. Herminie survived till 1887, when she died aged 61. 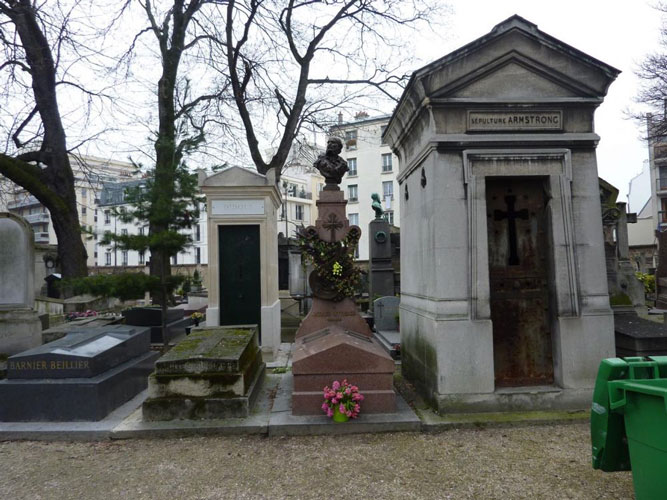 The tomb of Jacques Offenbach in Montmartre Cemetery