Franz Liszt (born October 22, 1811, Raiding, Hungary – died July 31, 1886, Bayreuth, Germany), Hungarian piano virtuoso, composer, arranger, conductor, author and music teacher. He was one of the most important composers of the Romantic period. His compositions inspired a whole generation of keyboard virtuosi. Among his many notable compositions are his 12 symphonic poems, two (completed) piano concerti, several sacred choral works, and a great variety of solo piano pieces.

Family and early years of a child prodigy

Franz Liszt was born in Raiding, Hungary, son of an official in the service of Prince Nicolas Eszterházy. He was the only child of Adam Liszt and Anna Maria Läger, the daughter of an Austrian draper. By the age of six years, young Franz had already demonstrated a remarkable affinity for music.

His first music lessons were provided by his father (he played the piano, violin, cello and guitar); within a few years had made such progress that he began to compose at the age of eight and to perform in public at the age of nine. Liszt’s prodigious talents won the patronage of local Hungarian aristocrats, and in 1821 his family took him to Vienna to further the boy’s musical education. He studied piano with Carl Czerny, a composer and pianist who had been a pupil of Ludwig van Beethoven, and studied composition with Antonio Salieri, the musical director at the Viennese court and Mozart’s old rival, he quickly became a proponent of Liszt’s genius. Upon hearing the boy play at a private home, he offered to train him in composition free of charge. At the age of eleven began a dazzling career as a concert virtuoso that lasted with a few interruptions, until 1848. Liszt gave several concerts in Vienna, with great success. Beethoven attended one of Liszt’s concerts. Beethoven is supposed to have bestowed a kiss of blessing on him after hearing him play, though by then a great composer could hear little or nothing. 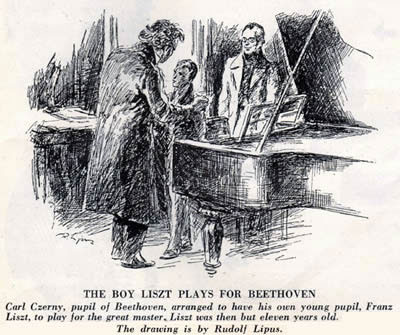 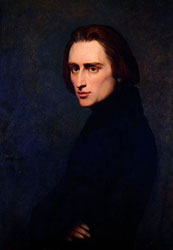 In 1823 Liszt moved with his family to Paris, where he was refused admission to the Paris Conservatoire by Cherubini because of regulation barring foreign students; instead, he studied with Anton Reicha, a theorist who had been a pupil of Joseph Haydn’s brother Michael, and Ferdinando Paer, the director of the Théâtre-Italien in Paris and a composer of light operas. Soon he was taken on tours of France and England, and with the help of Paer, wrote his first one-act opera, Don Sanche that was performed at the Paris Opéra in October 1825, Liszt then was only fourteen.

In 1826 he toured France and Switzerland, returning to England again in the following year. Liszt’s father passed away when he was fifteen. The event proved to be extremely traumatic for him, and it necessitated that Franz share their one-bedroom Parisian apartment with his mother. He began to teach the piano and to interest himself in the newest literary trends of the day. Wealthy young ladies beat a path to his door, with one of them he fell in love. When her father insisted that the attachment be broken off, Liszt became extremely ill. He sank into a deep depression; Liszt was considered so close to death that his obituary appeared in a Paris newspaper. Only the gunfire of July Revolution of 1830 awakened him. With it resulting in the abdication of the French king Charles X and the coronation of Louis-Philippe, he sketched out a Revolutionary Symphony.

Between 1830 and 1832 Liszt became acquainted with his contemporaries, all of whom were to prove lasting influences on Liszt’s own works and performance style. At the end of 1830 Franz first met Hector Berlioz and began lifelong friendship with him on the eve of the premiere of the Symphonie fantastique, a work that exerted enormous influence on him. From Berlioz he inherited the command of the Romantic orchestra and also the diabolic quality that remained with him for the rest of his life.

In 1833 he first heard Niccolò Paganini and was impressed. Liszt again became interested in virtuoso technique and resolved to transfer some of Paganini’s fantastic violin effects to the piano, writing a fantasia on his La campanella. At this time he also met Frédéric Chopin, a third composer who influenced him; under Chopin’s influence Liszt’s poetic and romantic side began to develop.

Franz Lizst at Piano with Friends (composer Hector Berlioz and Liszt’s teacher Carl Czerny (standing), Liszt at the piano and the violinist Heinrich Wilhelm Ernst at his right, the artist Joseph Kreihuber at his left). Lithograph, 1846. Artist: Joseph Kreihuber

In 1834 Liszt had composed a single piece which he called Harmonies poétiques et religieuses, an extraordinary work inspired by and named after a collection of poems by Alphonse de Lamartine. The lyrical style of these works is in marked contrast to his youthful compositions, which reflected the style of his teacher Czerny.

It was also at about this time that Liszt first made the acquaintance of Marie de Flavigny, Countess d’Agoult, who, although married, would become his companion for the next twelve years, and bear three children by him (one son and two daughters). Eluding the scandal that would have doubtless ensued were the couple to remain in Paris, they instead embarked on a four-year long period of travel throughout Switzerland, France and Italy; their personal ‘years of pilgrimage’ would inspire the composition of several descriptive works for solo piano, collectively known as the Années de pèlerinage (1837-1854), regarded as being among Liszt’s finest works. Toward the end of 1839 his relations with Madame d’Agoult became strained.

He also wrote the first mature version of the Transcendental Études (1838, 1851); these are works for solo piano based on his youthful Étude en 48 exercices, but here transformed into pieces of terrifying virtuosity. He transcribed for the piano six of Paganini’s pieces – five studies and La campanella – and also three Beethoven symphonies, some songs by Franz Schubert, and further works of Berlioz.

From 1839, Liszt travelled throughout Europe, having become – with violinist Niccolò Paganini, with whom he was often compared – the most sought-after of all performing musicians. In 1839–1840 he visited Hungary. Liszt wrote piano music that makes free use of national tunes. His renewed interest in the music of the Gypsies laid the foundations for his Hungarian Rhapsodies, based on Hungarian Romany music and ornamentation. 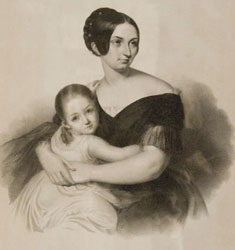 In 1844 Liszt finally broke with Marie d’Agoult, as his relationship with her waned, it was quickly replaced by another. In February 1847 Liszt met the Polish-born Princess Carolyne Sayn-Wittgenstein while concertizing in Kiev. Like the Countess d’Agoult, she was a rich noblewoman trapped in an unhappy marriage. Liszt gave his final concert for pay at Yelisavetgrad (Kropyvnytskyi), Ukraine, in September, and then spent the winter with the Princess at her estate in Woronince.

In 1848 Liszt settled down in Weimar, he was Kapellmeister to the ducal court at Weimar, where he performed and staged many new musical works. Liszt was later joined by the Princess Carolyne Sayn-Wittgenstein, who had unsuccessfully tried to obtain a divorce from her husband. She escaped from Russia with her young daughter Princess Marie Sayn-Wittgenstein, leaving behind the greatest part of her immense fortune. Her influence on Liszt was dramatic; she encouraged him to stop touring and, instead, teach and compose, so he could have a more domestic life with her. This was the period of his greatest production, Liszt now turned his attention to new forms of composition, particularly to symphonic poems, in which he attempted to translate into musical terms works of literature and other subjects. During Weimar period (1848-1861) he composed the Piano Concerto No. 1 in E-Flat Major (1849; revised 1853 and 1856), the Piano Concerto No. 2 in A Major (1839; revised 1849 –1861), A Faust Symphony (1854; revised 1857 – 1861), A Symphony to Dante’s Divina Commedia (1855 –1856), and 12 symphonic poems. He also composed the Totentanz (Dance of Death) (1849; revised 1853 – 1859), based on the plainsong Dies irae, for piano and orchestra, revised versions of the Transcendental and Paganini Études and of the first two books of the Années de pèlerinage, choral works, and numerous others.

After ten years in the employ of the Court at Weimar, Liszt resigned from his post in 1859, primarily a result of his frustration with the lack of financial support from Carl Alexander, his royal benefactor. Liszt left Weimar in 1861 to join Carolyne, who had moved to Rome in order to pursue her petition to the Pope himself for an annulment of her marriage to Prince Nicholas von Sayn-Wittgenstein, with the goal of finally being free to marry Liszt. The marriage did not take place and the couple continued to live separately in Rome, starting a period of his life that Liszt later described as une vie trifurquée (a three-pronged life), as he divided his time between his comfortable monastic residence in Rome, his visits to Weimar, where he held court as a master of the keyboard and a prophet of the new music. In 1862 his daughter Blandine died at the age of 26. Liszt wrote his variations on a theme from the J.S. Bach cantata Weinen, Klagen (Weeping, Mourning) ending with the chorale Was Gott tut das ist wohlgetan (What God Does Is Well Done), which must have been inspired by this event.

At the age of fifty-four, Liszt entered the lower orders of the Church, and undertook serious theological study in preparation to become a member of the clergy. Although he was never ordained as a priest, Liszt nevertheless found spiritual solace in the Church’s teachings, a solace that manifested itself musically in the composition of two large-scale religious choral works – the oratorios Die Legende von der heiligen Elisabeth (The Legend of Saint Elizabeth) (1862) and Christus (1866) – as well as dozens of sacred choral works. Upon his investiture as abbot in 1865, he took to wearing the habit of the Franciscan order for the rest of his life. In 1867 he wrote the Hungarian Coronation Mass for the coronation of the emperor Francis Joseph I of Austria as king of Hungary. Meanwhile, Liszt’s daughter Cosima had married the pianist and conductor Hans von Bülow, whom she later deserted for Wagner, already the father of two of her children.

In 1870, Liszt returned to Weimar to conduct the music festival honoring the centennial of Beethoven’s birth. In 1875 he accepted the presidency of the Hungarian Academy of Music at Budapest. The remainder of Liszt’s life was divided among Rome, Weimar and Budapest. In Liszt’s later years, as he began to suffer from bouts of depression and deteriorating physical health, his music grew accordingly darker, freer and even ambiguous in its use of non-traditional harmony. 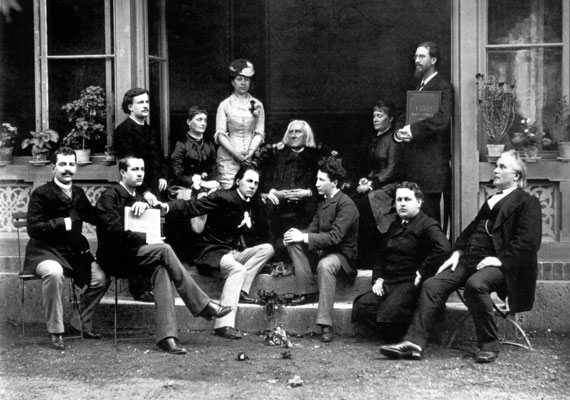 Liszt celebrating his 73rd birthday with some of his students,1884.

His final years were as busy as ever, and in 1886 he gave concerts in Budapest, Paris, Antwerp and London. He died in Bayreuth during the Wagner Festival, now controlled, since her husband’s death, by his daughter Cosima, to whom his appearance there seems to have been less than welcome.