Carl Czerny (born February 21, 1791, Vienna, Austria – died July 15, 1857, Vienna), was a prolific, industrious and influential Austrian pianist, composer and teacher of his time. Known for his pedagogical works for the piano, he has a unique position in the development of piano teaching and playing. Czerny was a pupil of Ludwig van Beethoven and Muzio Clementi and the teacher of Franz Liszt. Czerny’s works include not only piano music (études, nocturnes, sonatas, opera theme arrangements and variations) but also masses and choral music, symphonies, concertos, songs, string quartets and other chamber music. Czerny created his original method of piano practice focused on finger dexterity and velocity. Many of his etudes (studies) are widely used today for piano practice, especially such collections as The School of Velocity, The Art of Dexterity, and Etudes for the Left Hand.

Carl Czerny was born in Vienna in a musical family of Czech origin. His grandfather was a violinist and his father, Wenzel Czerny, was an organist, oboist and pianist. He came to Vienna in 1750 and set up as a piano teacher. When Carl was six months, his father took his family to Poland, where he had been hired as piano teacher to a noble family, but in 1795 the family came back to Vienna.

Czerny was a child prodigy with an ability to play piano at an early age of three, he wrote his own music when he was seven, and demonstrated a fine musical memory. Carl performed in public at the age of ten, and commenced his own career as a teacher at fourteen. His father was his first piano teacher who taught him mainly the works of Bach, Mozart and Clementi. At the age of eleven, Carl Czerny was introduced to Ludwig van Beethoven by his piano teacher Wenzel Krumpholz. Beethoven was so impressed with Czerny’s performance of his Sonata Pathétique that he enthusiastically accepted ten-year-old Carl as his student. Czerny remained under Beethoven’s tutelage for the next three years. During this period, Carl devoted himself to learning piano lessons from the world’s most famous composer. Beethoven marvelled at Czerny’s eidetic memory. 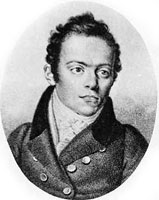 Carl Czerny as a young man

Czerny went on to take lessons from Johann Nepomuk Hummel and Antonio Salieri. He also attended courses which Muzio Clementi held in Paris, Vienna, St. Petersburg, Berlin, Prague, Rome and Milan. At age of 15 he decided to dedicate his entire life to teaching, composing and writing music. Czerny taught in Vienna, and he soon earned great reputation for his teaching methods that even Beethoven himself had asked him to teach piano for his nephew. Czerny was selected to be the first to play Beethoven’s celebrated Emperor concerto in public in 1812. However, unlike most composers of his times, he felt the life of a concert pianist was not for him and decided to become a teacher instead. Some of the most famous nineteenth-century composers including Stephen Heller, Theodor Leschetizky, Sigismond Thalberg, Anton Door, Theodor Dohler and Franz Liszt were his students.

Czerny never married, he continued to live with his parents. His lessons occupied him from early morning until late evening. Though he became wealthy, he was not much interested in money.

Czerny’s lasting influence, however, was in his piano studies, which were greatly esteemed by teachers for generations to come. These include the School of Velocity, and the School of the Left Hand. These exacting sets of graded exercises were still being widely used in the early 21st century. Czerny also left a valuable essay on performing the piano sonatas of Beethoven. He published an autobiographical sketch, Erinnerungen aus meinem Leben (Memories from My Life; 1842).

By the early 1840s he was having problems with his health. After his parents died, he shared his home with an ever-growing pride of cats. By 1850 he was semi-invalid. Before his death at 66, he methodically divided up his wealth among various charities and musical organizations.