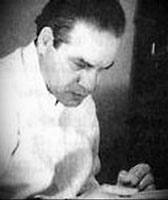 In 1936-1939, he studied composition with Vissarion Yakovlevich Shebalin at the Gnessin State Musical College.

In 1939-1945 he served in the brass band of the Moscow Red Banner Infantry School.

His elder brother Zinovy Lvovich Kompaneyets was a Soviet pianist and composer.

David Lvov-Kompaneyets died in 2002 and was buried at Vagankovo Cemetery in Moscow.